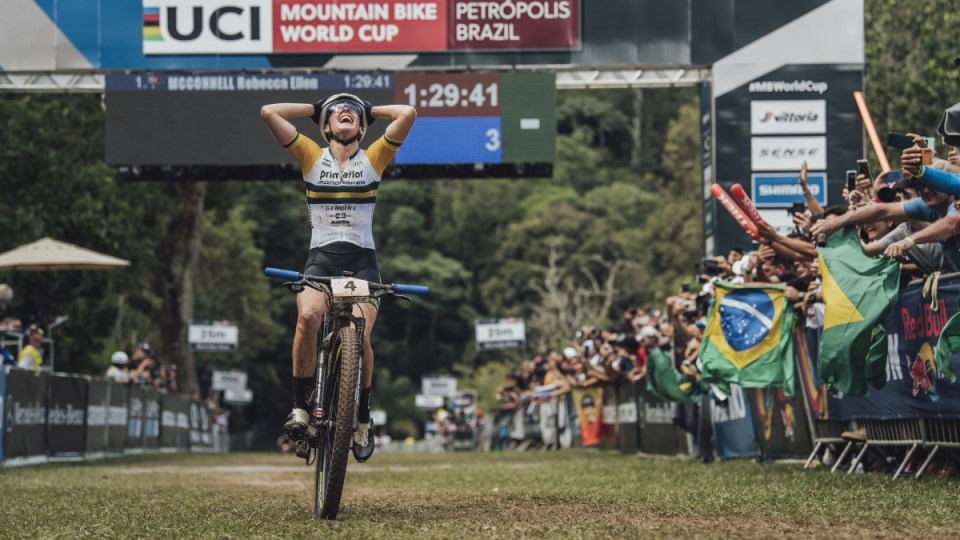 Rebecca McConnell has won the opening round of the mountain bike World Cup in Brazil. Photo: AAP/Red Bull

Top Australian mountain biker Rebecca McConnell has broken through for her first World Cup win, taking out the opening round in Brazil.

It is the first time an Australian mountain biker has won a World Cup round in the Olympic event since her husband Dan achieved the feat nine years ago.

McConnell, who has competed at the past three Olympics, won bronze medals at the 2019 and 2020 world championships.

She had a disappointing Tokyo Games last year, finishing 28th, but the win at Petropolis is a massive boost and McConnell said she was “lost for words.

“(This is) so special and so crazy,” McConnell said.

“Coming down into the finish line I’m like ‘what is happening’?

“Everybody has said, it’s coming, it’s coming … I have been super consistent over the last couple of years – on the podium more often than not, (but that) never means a win is coming.

“Training-wise everything has gone super smooth and couldn’t ask for anything better, but I’ve had a lot of changes personally and it’s been a rough 12 months.”

McConnell now takes the series lead into the World Cup round from May 6 to 8 in Albstadt, Germany, which is where her husband won his World Cup race.