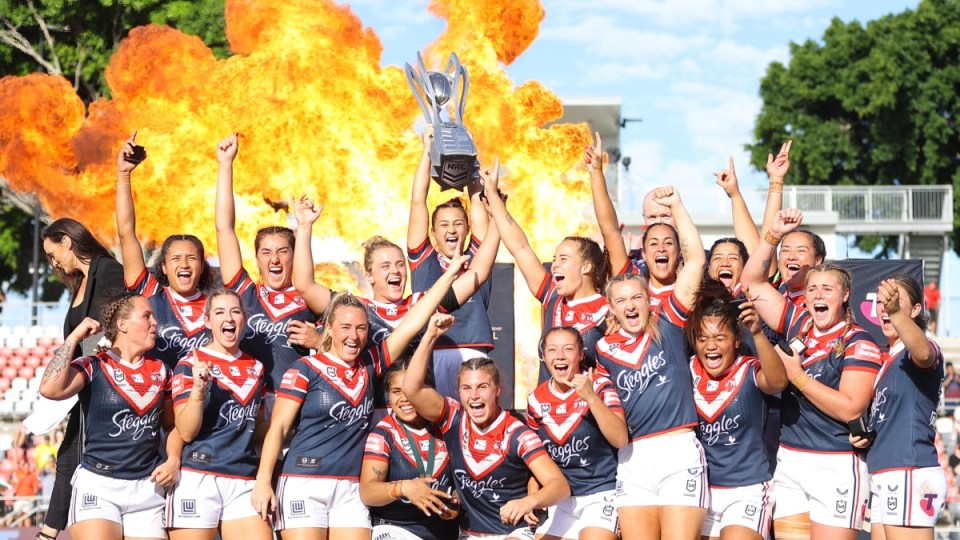 Sydney Roosters coach John Strange kept saying his side never stops believing, but even he was left stumped by their against-the-odds march to the NRLW title.

Fifth and set to miss the semi-finals altogether, the Roosters snuck in on points differential, thanks to Brisbane’s thrashing of Parramatta in the regular season’s final game.

The Roosters then beat three-time defending champions Brisbane after trailing 16-0 in their semi-final, then on Sunday in Redcliffe came from 4-0 down to trump St George Illawarra 16-4 in the grand final.

It was their first title in three visits to the grand final, played out in front of 7855 rowdy fans in the competition’s first stand-alone decider.

The @sydneyroosters have secured their FIRST EVER #NRLW Premiership with a 16-4 win over the @nrl_dragons! 🐔 pic.twitter.com/daIF7bWt2P

“I’m overwhelmed by how they played,” Strange said.

“It was similar to last week. Down 4-0 at half-time, there was total belief.”

The Dragons scored in the first minute and then defended mightily until Yasmin Meakes and Isabelle Kelly crossed in the second half.

Hooker Olivia Higgins then sealed the result, skipping out of two tackles and finding space for her maiden NRLW try.

Free to play after winning a judiciary battle earlier in the week, Roosters prop Sarah Togatuki was instrumental for the victors and a deserved winner of the Karyn Murphy Medal for best on ground.

“She (Kelly) is a big game player and was up for this; the bigger the game, the better she is,” Strange said.

“That try was really important but .. (if) she doesn’t come up with that (tackle on Tonegato) and they score in the corner it turns the game.”

Roosters winger Brydie Parker left the game in the 19th minute, collapsing with a suspected ACL tear and copping Taliah Fuimaono’s shoulder to her face on the way down.

Fuimaono was sin-binned but the Roosters couldn’t exploit the one-player advantage, the Dragons’ scrambling defence holding firm in the playmaker’s 10-minute absence.

A Roosters knock-on in the game’s first set gave the Dragons an early look and Tonegato needed no further invitation.

She darted from the scrum base, drawing two players to release winger Madison Bartlett who scored in the left corner.

They looked to have skipped out further when, in a rare return to Roosters territory, Keely Davis collected her own grubber kick and scored under the posts.

Replays showed a knock-on though, crucially denying the go-ahead try in the shadows of half-time.

“I was just concerned about our lack of attention to detail on the attacking side that probably bit us in the butt at the end there,” he said.

“(It’s) sh-thouse … it hurts; feel sorry for the girls who busted their arse for me in the preseason.

“It’ll burn for a little while, but someone had to win and lose.

“It doesn’t feel great, but I’m proud of the girls who came in and the standard on what it means to be a Dragon.”

The pandemic has taken its toll on Australian nurses, and now hospitals are scrambling for staff
Ferrari’s Charles Leclerc eases to all-the-way Australian Formula One GP win
Today's Stories