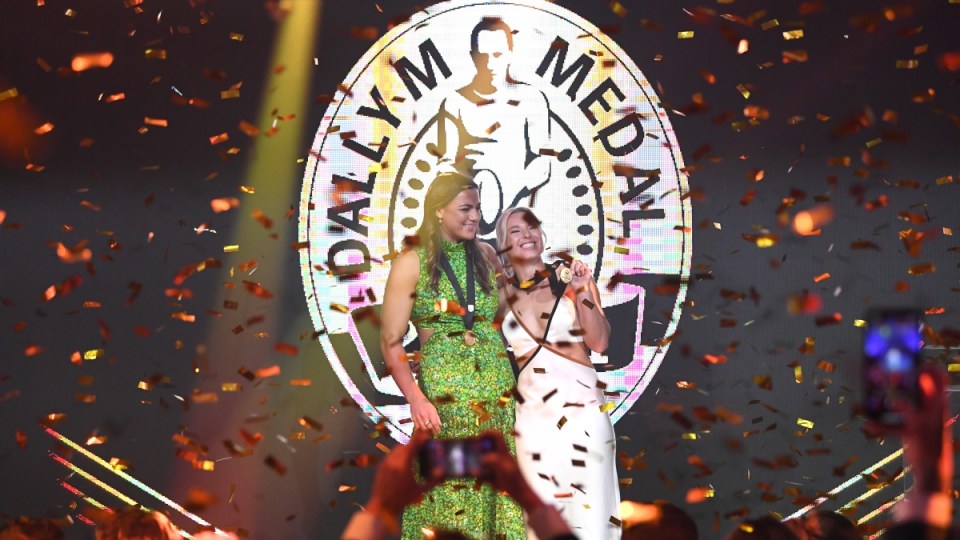 The NRLW Dally M Medal has been shared for the first time, with St George Illawarra’s Emma Tonegato and Brisbane’s Millie Boyle unable to be split in voting.

Olympic rugby sevens gold medallist Tonegato, who will play in Sunday’s grand final against Sydney Roosters, and fellow dual-code star Boyle shared the honour as the competition celebrated their best in Brisbane on Thursday night.

In a grandstand finish, both fullback Tonegato and forward Boyle polled three votes in the final round to overtake Parramatta Eels forward Simaima Taufa.

Tonegato helped the Jillaroos to a World Cup title as an 18-year-old in 2013, before switching codes and starring in Rio’s gold medal run and again at Tokyo last year.

Tonegato, now 27, knocked back an approach from St George Illawarra to play in the inaugural NRLW season in 2018 to re-sign with Rugby Australia until after last year’s Olympic Games in Japan.

She’s dominated after linking with them for a maiden season this year, scoring four tries in six games along with three try assists, six line-break assists, five line breaks and 967 running metres – second only to Boyle.

TACKLE OF THE YEAR. 👏

Tonegato also took out the tackle of the year award, spectacularly chasing down and turning Roosters centre Jess Sergis into touch in round five.

“I’ve loved coming back to the NRL, it really is the game I grew up watching and I’ve always wanted to play professionally,” she said.

“They’ve been so welcoming down there at the Dragons. I really am speechless and to share with a player the calibre of Millie is an honour.”

Boyle averaged 198 metres per game for the defending champions, who were upset by the Roosters in Sunday’s semi-final.

“I honestly did not expect it at all,” Boyle said.

“Emma played such an amazing season and it’s really exciting to watch her in a grand final, coming back to rugby league from rugby sevens, after coming from league.

“It’s exciting to see what she’s done for her team and honoured to be alongside her.”

Gold Coast Titans skipper Brittany Breayley-Nati, the inaugural NRLW player of the year in 2018, was named captain of the year while Dragons mentor Jamie Soward won the coach of the year gong.