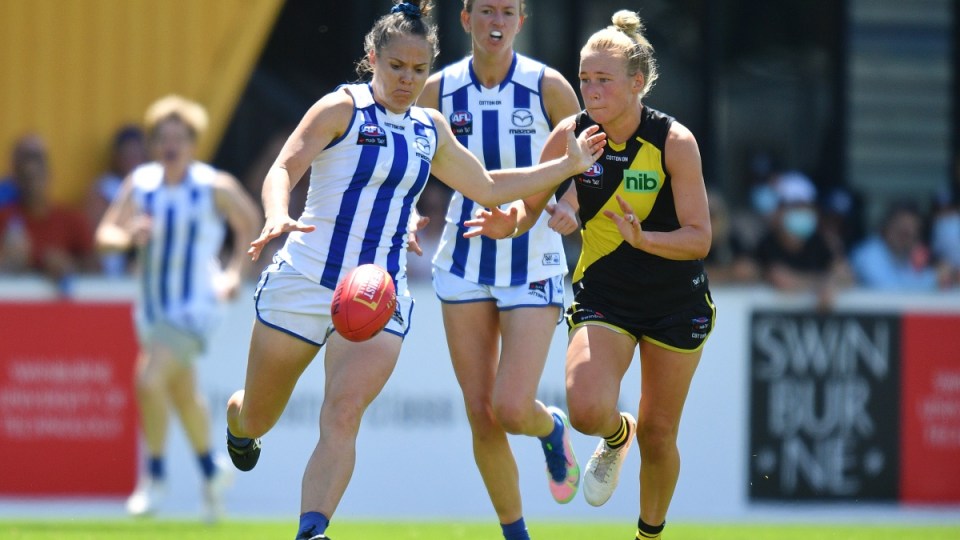 North Melbourne's Emma Kearney is the first AFLW player to be named an All-Australian in all six seasons. Photo: AAP

North Melbourne star Emma Kearney has become the first and only player to be named All-Australian in all six AFLW seasons while Carlton’s Mimi Hill has capped off a remarkable return from injury by claiming the Rising Star award.

Kearney, who was the league’s best and fairest in 2018, was also named the team’s captain, playing as a defender after several dominant years through the midfield.

“Obviously really privileged to lead such a skilful and great group of women.”

Congratulations to all the players named in the 2022 AFLW All-Australian team led by Emma Kearney and Hayley Miller 👏#AFLWAwards | #AFLW pic.twitter.com/i9ElV47mWo

Hill didn’t make the final team after being a part of the 40-player extended squad but claimed the Rising Star award by one vote, ahead of Gold Coast’s No.1 draft pick Charlie Rowbottom.

Hill, who tore her ACL last year, was nominated for the award after an incredible comeback performance against Adelaide, where she racked up a career-high 26 possessions, five marks and four tackles.

Tahlia Randall has taken out the @Toyota_Aus Mark of the Year for her unbelievable mark against the Giants in Round Three.#AFLWAwards | #AFLW pic.twitter.com/RqwCtXxQNj

“If you told me 12 months ago when I was sitting on the couch, or hobbling around on crutches that I was going to be here, I wouldn’t believe you,” Hill said.

“My heart’s racing so quick, this is crazy. This is a dream and the fact that I’m here is crazy.

“Anyone who’s gone through a serious knee injury or any long rehab knows how much you miss it when you’re not on the field.

“That was the fire that got me back out there and I’m so happy to be back.”

What a year for the star forward who kicked 21 goals!#AFLWAwards | #AFLW pic.twitter.com/lc2zE3M4zJ

The 21-player team was dominated by grand finalists Adelaide and Melbourne, who had four players apiece.

There were five debutants.

Brisbane’s Orla O’Dwyer became the first AFLW player from Ireland to earn an All-Australian guernsey, while Fremantle skipper Hayley Miller was named vice-captain on her debut.

Adelaide’s Ebony Marinoff received a fourth blazer, while Melbourne captain Daisy Pearce received her third, but her first since 2018.