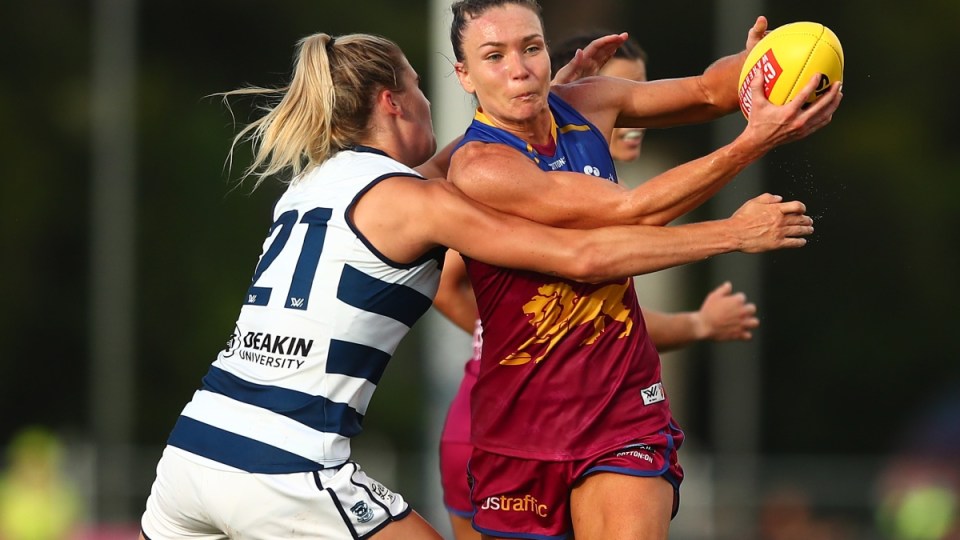 Emily Bates was crowned the AFLW’s best and fairest in Melbourne on Tuesday night. Photo: Getty

Brisbane star Emily Bates has claimed the AFLW’s highest honour, beating Adelaide’s Anne Hatchard to the league’s best and fairest by one vote.

The star Lion had already claimed the AFL Coaches’ Association player-of-the-year award and on Tuesday night became the first Brisbane player to clinch the best and fairest.

Hatchard and Bates were tied on 18 leading into the final round but while the Crow added two more votes, the star Lion claimed three.

“I know my name was being thrown around a little bit but that was a shock to me and this is obviously the greatest honour you could ever achieve,” Bates said.

“I was looking for improvement and last year, as much as it was amazing winning a premiership, I was hungry to become a better player.

“Instead of just being a consistent player, I wanted to see what my true potential was.

“I made a lot of changes in the off-season and I’m just happy that I could reap the rewards today.”

"Sisterhood is definitely what it feels like at the Lions and I love these girls like sisters. That's what feels like has driven our success, that love for each other and care." ❤️

We are smiling, crying and laughing to Emily Bates' speech 🥲#AFLWAwards | #AFLW pic.twitter.com/YrzCpbZsgo

Bates, 26, paid a poignant tribute to her father, who got her into footy at Yeronga but died when she was 15 and didn’t see her AFLW career.

The speech then took a lighthearted turn when Bates joked coach Craig Starcevich had agreed to do a “shoey” if she’d won – and he took the opportunity to actually do that, casually drinking out of his shoe.

Earlier, North Melbourne star Emma Kearney became the first and only player to be named All-Australian in all six AFLW seasons and was also named the team’s captain.

Carlton’s Mimi Hill capped off a remarkable return from an ACL injury by claiming the Rising Star award with 43 votes, one ahead of Gold Coast’s No.1 pick Charlie Rowbottom.

Hill averaged 21.5 disposals, 2.3 tackles, three clearances and 2.5 inside 50s in her comeback season.

The 21-player All-Australian team was dominated by grand finalists Adelaide and Melbourne, who had four players apiece, while there were five debutants.