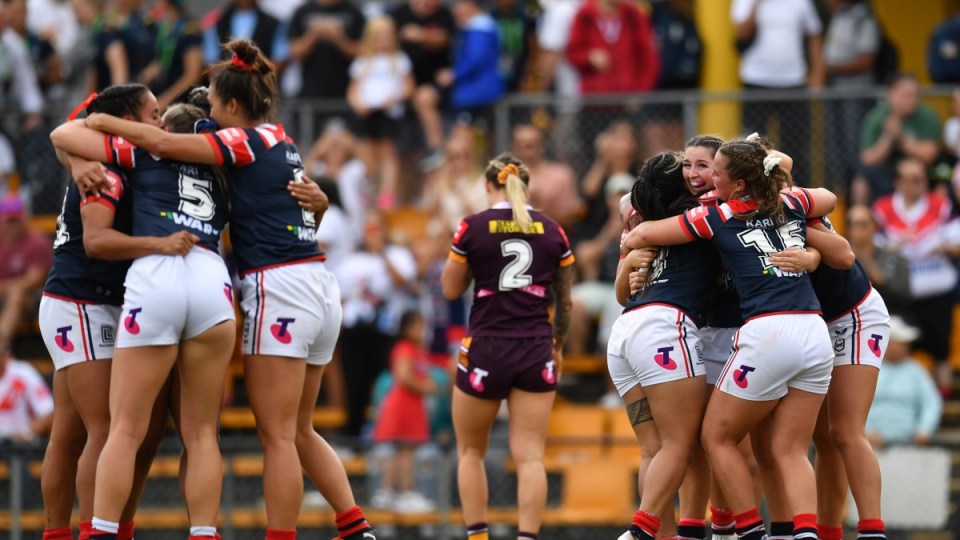 Sydney Roosters are into the NRLW grand final after beating Brisbane 22-16 at Leichhardt Oval. Photo: AAP

Brisbane’s NRLW dynasty is over after a shock 22-16 semi-final loss to Sydney Roosters that left the Broncos questioning why they weren’t given a home-ground advantage as minor premiers.

In the greatest upset in the competition’s history, the Roosters booked a grand final date with St George Illawarra next Sunday at Redcliffe.

The win marked just the third time the Broncos have been beaten, with Brisbane having won all three previous competitions.

It also came after the Roosters slipped 16-0 down after just 13 minutes in front of 2124 fans at Leichhardt Oval in Sydney.

The Roosters also had a player sent to the sin-bin early in the second half.

“One thing that’s hard to take on board is you win a minor premiership, yet you play in Sydney with their home supporters,” Brisbane captain Ali Brigginshaw said.

“It’s not the reason we lost, but I’d like to see that changed.

“We’re the team everyone wants to beat so when you play in Queensland you are going to have support there and it’s going to lift you as a team.”

Brisbane was also unhappy about a key try in the Roosters comeback.

After a Raecene McGregor offload for Isabelle Kelly and Corban Baxter lofted a cutout pass to Leianne Tufuga, the Roosters were within six points at the break.

They dominated the second half.

The key play then came when Keilee Joseph was ruled to have got to the ball to the tryline after first getting it to the ground short.

“They probably got fortunate with a few calls there that got them back into the game,” Broncos coach Kelvin Wright said.

“I think it’s no try. They looked at it that many times. From what I was looking at I thought it was short of the line. I didn’t think it was a try.”

Remarkably, the Roosters only made the finals when Brisbane flogged Parramatta by more than 15 points last week, allowing the Tricolours to sneak into fourth place.

“No one gave us a chance and it was about us and those four walls that believed,” Roosters coach John Strange said.

“I have been involved in a lot of games as a player and coach, and I have never been prouder than I am today.”

The Dragons should still enter next Sunday’s final as favourites, having rivalled Brisbane as the team to beat all year.

Their 24-18 win over Gold Coast on Sunday did not properly detail their dominance, after going from 6-0 down to 24-6 up with five minutes to play.

Keeley Davis starred at hooker with halfback Rachael Pearson battling injury, grubber-kicking at the line for one Emma Tonegato try and chasing through on another for her own maiden four-pointer.