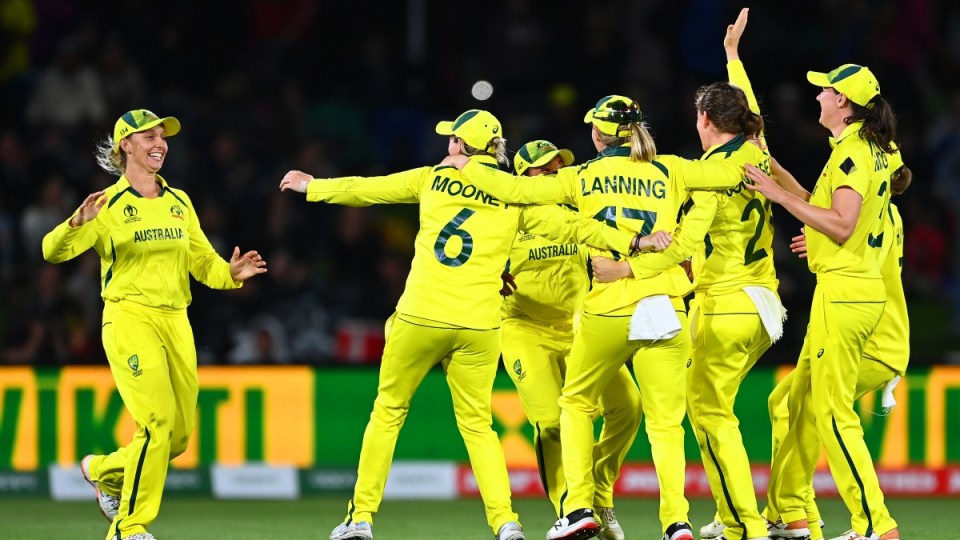 Alyssa Healy smashed Australia to World Cup glory against England, making a colossal 170 as Australia regained the trophy with a 71-run win in the final.

Meg Lanning’s side produced a perfect month of cricket in New Zealand, winning all nine games to become World Cup champions for the seventh time.

None was more dramatic than their final outing, when England threatened a World Cup heist at Christchurch’s Hagley Oval on Sunday.

Australia’s star wicketkeeper made 100 off as many balls and then thrashed away, bringing out the scoops, sweeps and flicks before finishing with 170 off 138 balls.

Australian victory appeared certain as Healy left the field to a standing ovation and backslaps from her English opponents.

However, Nat Sciver pulled England within touching distance of a world record chase, belting 148 from 121 balls.

Sciver, who entered the contest at 2-38, was denied a fairytale finish as she ran out of partners with 38 balls left, England all out for 285.

Australia was jubilant as Ash Gardner caught Anya Shrubsole at mid-off for the final wicket, reclaiming the trophy from England.

“That was a special game of cricket,” Healy said. “And that was pretty special from our group.

Healy struck 26 boundaries on her way to the biggest total in any short-form World Cup final, men’s or women’s, an innings summed up by former captain Lisa Sthalekar.

“This is ridiculous from Alyssa Healy!! We are witnessing the best innings ever in a FINAL!!” she said.

Such was Australia’s dominance, captain Lanning didn’t need to bat until Australia was three wickets down, and Ellyse Perry – the subject of injury doubts before taking her place – could also relax in the stands until the 48th over.

Healy combined with Haynes, who made 68, for an opening stand of 160 – the biggest partnership of a Women’s World Cup final.

Healy and Beth Mooney, elevated to first drop, then put on a similar clinic with a 156 runs together.

Lanning (10), Ash Gardner (1), Tahlia McGrath (8 not out) and Perry (17 not out) were able to throw the bat late as Australia racked up its monster score.

Set a world record 357 for victory, England went about the chase with admirable determination, keeping the rate at six runs per over.

However, it lost wickets at regular intervals, with Schutt (2-42 off eight) removing both openers in her opening spell.

Sciver was the thorn in Australia’s side, hitting 15 fours and a six, surviving as her teammates fell.

King (3-64 off 10) trapped captain Heather Knight in front for 26 and then bowling Sophia Dunkley around her legs for 23.

Jess Jonassen (3-57 off 8.4) provided steel at the death, claiming the final wicket to spark pandemonium.

England’s sliding doors moment came in the 21st over when both Haynes and Healy were dropped, four balls apart, off Kate Cross’ bowling.

Sophie Ecclestone, the world No.1-ranked ODI bowler, was again taken apart by Australia, returning 1-71 after 0-77 in their group stage loss.

Anya Shrubsole was the only English bowler spared serious damage with 3-46 off 10 overs.