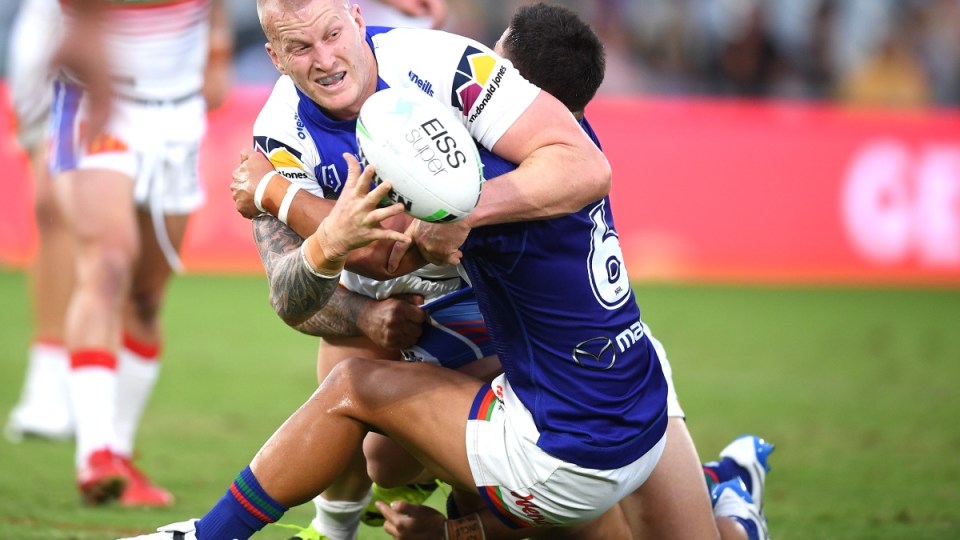 Mitch Barnett has been handed a six-game NRL ban for his off-the-ball hit on Penrith's Chris Smith. Photo: AAP

Newcastle forward Mitch Barnett has been suspended for six games at the NRL judiciary for raising his forearm and collecting Penrith forward Chris Smith in an off-the-ball hit.

Barnett was sent off in the Knights’ 38-20 loss to the Panthers in Bathurst on Saturday and was referred straight to the judiciary on a dangerous contact charge.

After the NRL’s legal team of Lachlan Gyles argued for an eight-game ban and Barnett’s lawyer Nick Ghabar pleaded for a four-game suspension, the panel of chair Geoff Bellew, Bob Lindner and Tony Puletua met in the middle and gave the forward six weeks off.

The panel deliberated for 32 minutes before handing the 27-year-old his suspension, saying his behaviour was reckless but not intentional.

“I’m disappointed and I’ll go away and do my time.

“The lesson learnt is that I can’t be careless in terms of player safety.”

Barnett was flanked by Knights football manager Danny Buderus as he arrived at League Central on Tuesday for the two-hour hearing.

He said he only saw Smith late and put out a “bumper” to protect himself.

The back-rower said he only noticed Smith in his peripheral vision as he was focused on stopping the Panthers spreading the ball to the flank to score a try.

“I have a duty of care to opposition players and I understand that,” Barnett said during the hearing.

“It was careless, but I never intended to lift my arm that high.”

Barnett’s team claimed the forward’s first point of contact was with Smith’s chest.

They also produced a character reference from John Quayle, which played a part in the panel’s decision.

The fact the Panthers back-rower only sustained a concussion and no break to his jaw, they said, led them to believe the Knights player should receive a four-game ban at most.

Gyles rubbished Barnett’s claims and had argued for a stronger sentence but that fell on deaf ears.

“This idea that you weren’t able to see him just before contact is simply not true,” said Gyles, who described Barnett’s elbow as a “blunt instrument”.

“You could have got past him easily with just using your hands, couldn’t you?

“You’re a very co-ordinated, fit and experienced rugby league defender. Can I suggest to you it’s very likely to have been an intentional act?”

Smith has not been named in Penrith’s round four game against South Sydney, while Barnett will not be able to play for the Knights until round 10 when they face Canterbury.