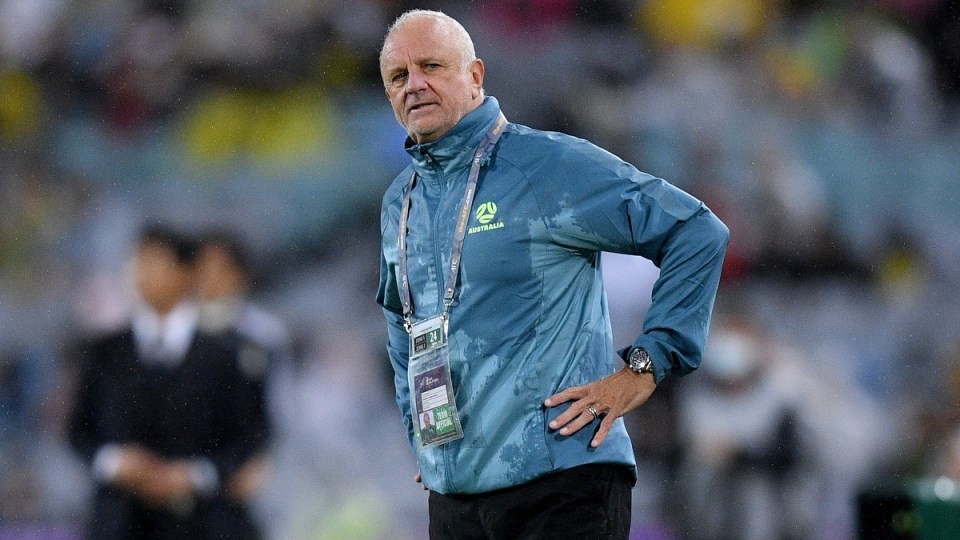 Socceroos coach Graham Arnold says speculation over his future is part of life in the role. Photo: AAP

Under-fire Socceroos coach Graham Arnold insists he’s “fine” heading into a World Cup qualifier against Saudi Arabia which may be his last match in the position.

Speculation is rife Football Australia is considering firing Arnold after Tuesday’s (Wednesday AEDT) game in Jeddah with hopes of automatic qualification for this year’s World Cup in Qatar dashed after a 2-0 home loss to Japan last week.

The loss to the Samurai Blue means Australia must go through the playoff route to reach a fifth-straight World Cup finals, firstly against the third-place team from the other group in Asian qualifying and then a one-off match against South America’s fifth-ranked nation.

Arnold however insists he’s unfazed by the rumours as he looks to defeat the already-qualified Green Falcons.

Watch live and free on Channel 10 from 5am AEDT on Wednesday morning. #AllForTheSocceroos pic.twitter.com/W3ug9SiKEt

“I don’t read what you guys write and I don’t do any social media, I block out all the external noise and just focus on the players because that’s what I’m here for,” he said.

“The only one that has told me a little bit is my wife … who has been hurt by it, but at the end of the day, she’s the one that’s checking in on me and I’m fine.

“This is always part of the job. I understand with coaching and the trade that I’m in, this is the way it works at times.

“But I know I’ve given my best and I’m giving my best to help these players.”

"Putting on the Green and Gold is always a privilege and honor, so there has never been a dead rubber to me. Obviously we can't go directly to the World Cup now but we have a chance to take some momentum into our upcoming games." #AllForTheSoccerooshttps://t.co/V5L0P8oNeg

Arnold will have a much-changed line-up for the final game in the third stage of qualifying with Mathew Leckie, Jamie Maclaren, Milos Degenek and Rhyan Grant all leaving the squad after the Japan defeat.

Maclaren is getting married while Leckie, Degenek and Grant are all one yellow card away from a suspension and won’t be risked against the Saudis.

Their absence, along with the already ruled-out players such as Aaron Mooy, Adam Taggart, Tom Rogic and Jackson Irvine, means the dead rubber will be a chance to impress ahead of the playoff fixtures for several up-and-coming and fringe talents.

Arnold has indicated Scottish-based Nathaniel Atkinson is poised to make his debut in a starting role, while Nicholas D’Agostino and Denis Genreau are also likely to feature.

Uruguay-born forward Bruno Fornaroli could also start after making his national team debut off the bench against Japan.

“It’s a good chance to see if Bruno – against a World Cup opponent – is ready,” he said.

“Bruno has brought a lot of energy to the camp. He’s such a fantastic guy and I think he showed in that little time he was on the field against Japan, he gives us something in a different way of a No.9.

The match against Saudi Arabia at King Abdullah Sports City kicks off at 9pm on Tuesday (5am Wednesday, AEDT).

Speculation ‘part of the job’ for Socceroos coach Graham Arnold