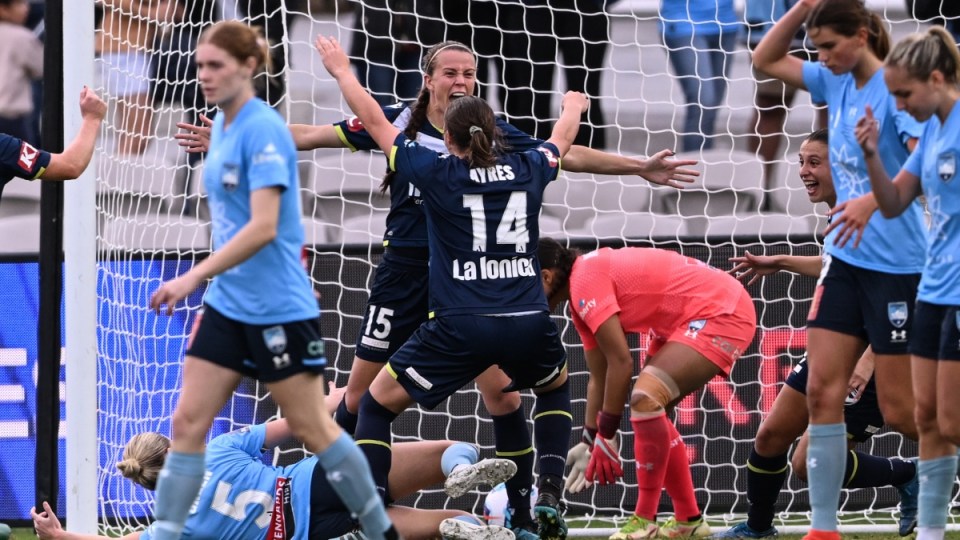 Like last year, Sydney finished top of the table this season and had home advantage but was pipped by Victory in the game which mattered most.

In front of 5027 fans for the grand final at Kogarah Oval, Victory withstood a relentless attacking onslaught from Sydney’s frontline trio of Princess Ibini, Cortnee Vine and Remy Siemsen to win the club’s fourth championship.

Victory took the lead when defender Amy Jackson poked home in the 49th minute before Catherine Zimmerman gave them a two-goal buffer soon after.

They have defeated @SydneyFC 2-1 in a nail biting Grand Final to become just the second ALW team to win consecutive championships!

But the real hero of the day for Jeff Hopkins’ side was goalkeeper Casey Dumont who overcame breathing difficulties, an ugly bang to the ribs and the constant tests from Sydney’s attack to win the player of the match award.

The sole blemish on her afternoon was when Vine was able to jag one back from a corner for Sydney.

The win means Hopkins is now the most successful coach in the history of the competition with his fourth title.

For Sydney this will feel like an opportunity missed.

Siemsen had a goal ruled out for offside and Dumont denied Mackenzie Hawkesby on the stroke of half-time.

Vision from the Victory changing rooms showed Dumont looking worse for wear but she carried on heroically.

After absorbing immense pressure in first half, Victory strike early in the second 45 via veteran Amy Jackson!

She returned to the field after the break but all the action was at the other end when Jackson headed in for her first of the season.

A Courtney Nevin corner was cleared away initially but was sent back into the box by Kyra Cooney-Cross, with Jackson outjumping Ally Green to score at the far post.

Siemsen had two gilt-edged chances to get Sydney back level but soon after Victory extended its lead when Zimmerman poked past Jada Whyman in the 64th minute.

She was on the spot to fire home the rebound and give @gomvfc a commanding lead!

But the two-goal advantage was only fleeting when Vine smashed in for Sydney with 25 minutes to go.

Try as it might, Sydney couldn’t fashion an equaliser and could count itself lucky when Victory had a goal rubbed out for a push on Whyman after she bundled the ball into her own net at a corner.

Cortnee Vine taps it home off Casey Dumont's save!