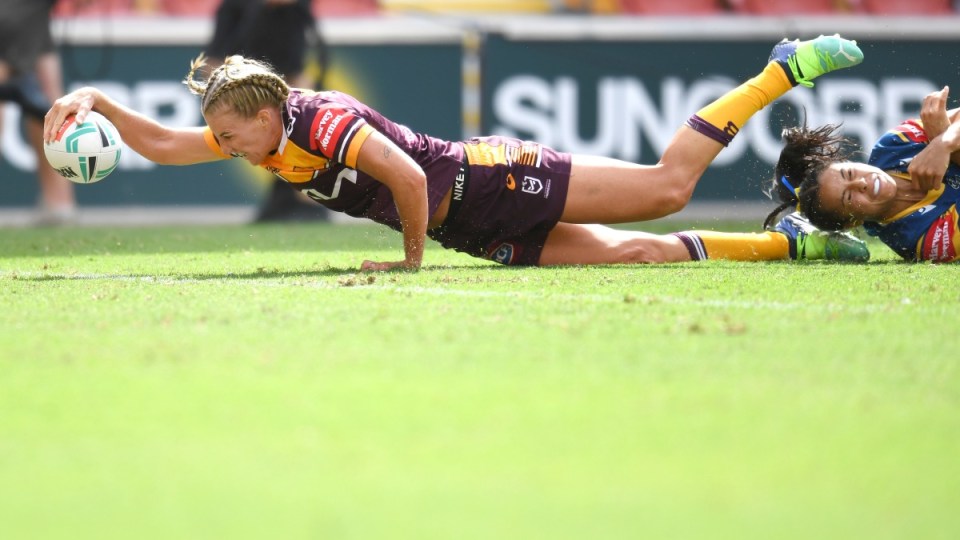 Ali Brigginshaw was among the tryscorers as Brisbane defeated Parramatta 38-4 in the NRLW. Photo: AAP

Brisbane insists there is no reason why it can’t win a fourth straight NRLW title if it fires in the finals after sounding a premiership warning against Parramatta.

The Broncos added another minor premiership to their women’s trophy cabinet on Sunday, easily accounting for Parramatta 38-4 and ending the Eels season.

The win ensured they would finish ahead of St George Illawarra at the top of the table, booking a date with Sydney Roosters next Sunday.

But in a regular season where the Broncos have been properly pushed for the first time in the competition’s four-year history, the minor premiership means little to them.

WHAT A WIN! Heading into the finals with another minor premiership under the belt 🏆 #NRLW pic.twitter.com/whnpZ66918

“It’s a nice thing to win along the way, but it’s not the trophy you start trying to win,” coach Kelvin Wright said.

“I was more focused (late in the game) on not letting in any more points (rather than for and against).

“It took a back seat. We’ve got another big game next week ”

In a closer season, the Broncos beat the Dragons 22-18 in round three and were then shocked by Gold Coast in round four.

But they weren’t challenged on Sunday from the moment Emily Bass scored off a nice left-to-right movement in the third minute.

Amy Turner and Shenae Ciesiolka also bagged first-half tries, before Hagiga Mosby went from provider to scorer in the second.

Captain Ali Brigginshaw then put the icing on the cake, in the Broncos first game at Suncorp Stadium since their maiden NRLW game in 2018.

“There’s been some really good performances from a lot of teams,” Wright said.

“We have full belief in our squad that when we play to our ability there is no reason why we can’t win.

“Going into next week we’ll have to bring our A game to put in the best performance we can.”

Meanwhile, there are greater concerns at Parramatta, with star fullback Botille Vette-Welsh suffering a suspected ACL injury early in the loss.

Any such blow would rule her out of State of Origin for New South Wales, and leave her in severe danger of missing the end-of-season NRLW competition.