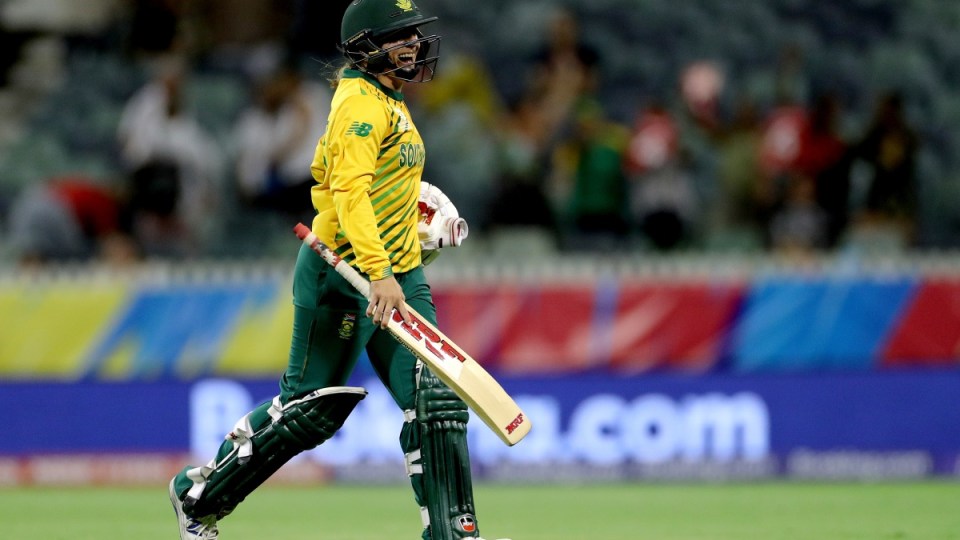 Mignon du Preez hit the winning runs off the final ball to eliminate India from the World Cup. Photo: AAP

Australia will face West Indies in the women’s World Cup semi-final after India crashed out with a final-ball loss at the hands of South Africa.

Chasing 275 for victory, South Africa hit seven off the final Deepti Sharma over to end the tournament of one the 2017 finalists on Sunday night.

It means South Africa will come up against England in the second semi-final on Thursday, while the undefeated Australians duel with West Indies on Wednesday.

Unbeaten in their past 10 matches against West Indies, Australia is hopeful of Ellyse Perry returning from a back injury for the knockout clash.

Heartbreak for India as South Africa seal a thrilling victory on the last ball 🤯#CWC22 pic.twitter.com/mrOzp6Fmmc

But despite their unwanted record in all formats against Australia, West Indies do have a favourable history in big games.

They won their last finals match in a World Cup tournament, shocking Australia in the decider of the T20s in the Caribbean in 2016.

On that night Hayley Matthews hit 66 and Stefanie Taylor 59, with that loss and the defeat at hands of India in the 2017 ODI World Cup prompting a rethink of tactics in Australian circles.

Meanwhile India’s exit marked just the second time in World Cup history it had failed to make the final four.

India began well after half-centuries from openers Smriti Mandhana (71) and Shafali Verma (53) and an assured 68 by captain Mithali Raj powered it to 7-274 even though it lacked a late flourish.

Laura Wolvaardt (80) and Lara Goodall (49) led South Africa’s chase, but it was Mignon du Preez’s unbeaten 52 that secured the three-wicket victory on the last ball of the game in Christchurch.

Du Preez was caught at long-on in the final over but was recalled after replays confirmed spinner Deepti Sharma had overstepped.

“The girls have given it all knowing the importance of today’s game,” Mithali said after the 2017 runners-up crashed out.

“It was a good game, good for the sport but it ends our campaign.”