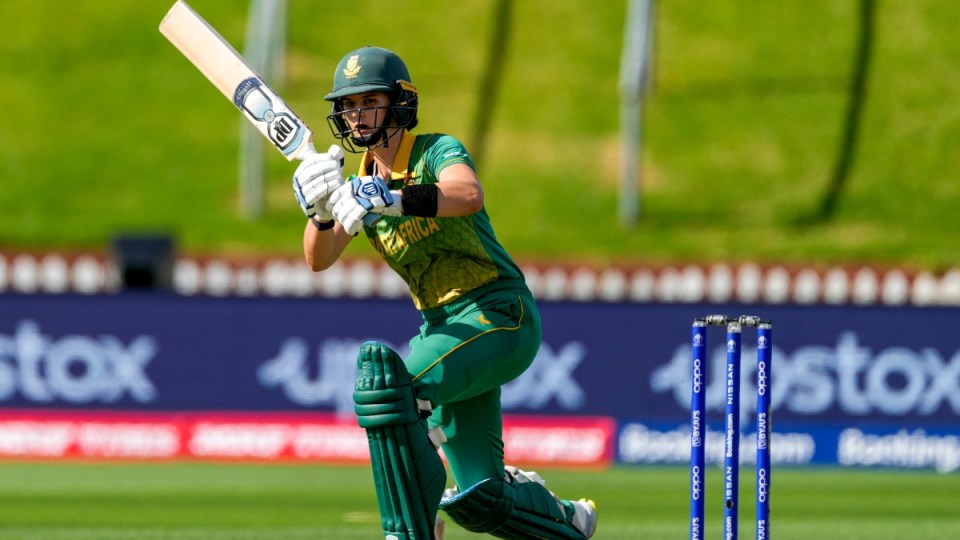 South Africa is into the semi-finals of the Women's World Cup in New Zealand. Photo: AAP

South Africa locked in a semi-final place and the West Indies kept their hopes alive at the Women’s Cricket World Cup when they shared competition points from Thursday’s rain-abandoned match.

The West Indies will regret the abandonment far more than South Africa, which was 4-61 when the decision was made to call off the match at Wellington’s Basin Reserve.

Defending champions England also enhanced its semi-final prospects when it beat Pakistan by nine wickets to move into fourth.

Katherine Brunt took a wicket with the first ball of the match and went on to take 3-17 as England bowled out Pakistan for 105 in 41.3 overs after winning the toss on a green pitch at Hagley Park, Christchurch.

Which teams will claim the final two spots in #CWC22? 🤔 pic.twitter.com/yTwNH5Xp4J

Opener Danni Wyatt made an unbeaten 76 from 68 balls and England improved its net run-rate as it reached the winning target with almost 31 overs to spare.

Heavy overnight rain and showers during the morning delayed the start of play at Wellington’s Basin Reserve, but a match of 26-overs per side finally began under brooding skies.

The West Indies won the toss, bowled and South Africa slipped to 4-22 before a partnership between Mignon du Preez (38) and Marizanne Kapp (5) righted the innings.

The advantage was still with the West Indies when the rain returned and ground staff covered the pitch and surrounds.

The umpires quickly decided that even if the rain stopped for the rest of the day, it would not be possible to complete the match.

The single point South Africa took from the match was enough to clinch its place in the last four with nine points from six games.

“Everybody’s extremely excited and happy to be in the semis,” South Africa captain Sune Luus said.

“It wasn’t the best of starts but we still have to take the positives out of today – the way Mignon batted was one. She has been shy of runs in the competition and she needed that for her confidence.”

The West Indies are currently third behind Australia and South Africa, having completed seven matches in the group stage with seven points.

Their semi-final hopes depend on the outcome of Sunday’s match between South Africa and fourth-placed India.

West Indies captain Stafanie Taylor said her squad likely would “have some popcorn and hope that South Africa do beat India.”

England’s win was impressive and continued a strong form improvement after beginning its title defence with consecutive losses.

Sophie Ecclestone then took 3-18 as England took full advantage of the toss.

Wyatt has been in mixed form throughout the tournament but came into her own as an opener on Thursday with her first World Cup half-century including 11 fours.