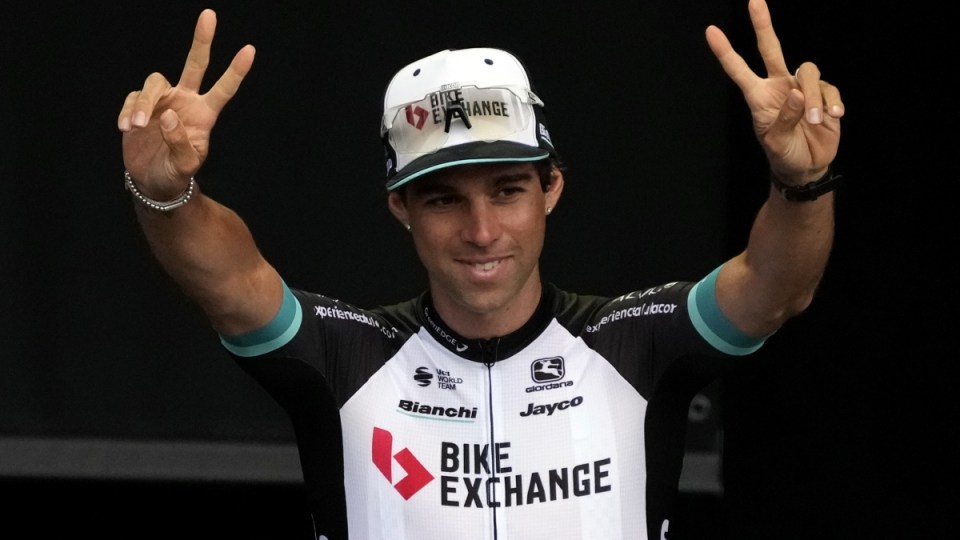 Australian Michael Matthews has won the opening stage on the Volta a Catalunya in a sprint finish. Photo: AP

Michael Matthews has expressed his best wishes for the health of Sonny Colbrelli, who collapsed at the finish after being pipped by the Australian to the opening stage of the Volta a Catalunya.

Colbrelli has subsequently recovered consciousness and has been well enough to talk about thinking about when he can next race.

Matthews overcome crosswinds, rain, and a steep incline to claim his first stage win in more than 18 months on Monday but victory was marred by Colbrelli’s collapse.

“I found out after the finish what happened. It’s never nice to hear something like this after your victory and I’m wishing him a good recovery and I’m hoping he’s OK.”

It was the 31-year-old Colbrelli’s first day’s racing since abandoning Paris-Nice after stage 1 a fortnight ago due to bronchitis.

The Italian needed CPR at the scene before being taken to hospital.

On Tuesday Bahrain Victorious, his team, said a first round of cardiac tests “showed no signs of concern or compromised functions,” with more tests to follow.

🏥 After being admitted to Hospital Universitari de Girona Doctor Josep Trueta, @sonnycolbrelli was conscious and feeling okay. He has since been in touch with family and friends as he recovers at the hospital.

Cobrelli was well enough to take to social media replying to a post from Matthews to thank him and congratulate him.

He later sent an audio message to La Gazzetta dello Sport, the Italian newspaper, in which he said: “I don’t remember anything at all. I crossed the line and then fell to the ground.

“I took some water from my soigneur, I saw a doctor and then I blacked out. I remember waking up in the hospital. Now they’re monitoring me and checking up on me.

“It was frightening at first but I’m already thinking about when I can race again.”

Money in the bank – @blingmatthews is back on the top step! 🤑

Bling (@GreenEDGEteam) powered home to the Stage 1 win of #VoltaCatalunya101 overnight, his first @UCI_cycling WorldTour win since the 2020 Bretagne Classic.

Colbrelli had led a break for the line 200 metres out at Sant Feliu de Guixols, a Costa Brava port east of Girona.

Matthews, of Bike Exchange-Jayco, over took him to win the 171.1-kilometre stage in 3hours 47 minutes and 11 seconds.

He had won on the same stretch of tarmac in a sprint finish in 2019.

"It’s been a long time without a victory for me now, so to come back to a finish that I knew well from a couple of years ago, to now win again, it means so much." – @blingmatthews 🎙#VoltaCatalunya101 🥇🏆https://t.co/PBX24XPfvd

This was Matthews’ first stage win since August 2020.

The 31-year-old Canberra native said: “It’s been a long time without a victory for me now, so to come back to a finish I knew well and win again, it means so much.

“My wife and my dog are here to support me today, and it’s so nice to cross the finish line and give my wife a massive hug.”

He added: “This course suits me quite well, a hard race and an uphill sprint to the finish.”

The final kilometre was a sharp climb and the last of a series of attacks was mounted by Colbrelli only for Matthews, riding on the opposite side of the road, to go with, then overhaul the Italian.

For Matthews, who contracted COVID-19 in February, then needed stitches after crashing out of  Strade Bianche earlier this month, this was another encouraging result after coming fourth in Milan-San Remo on Saturday.