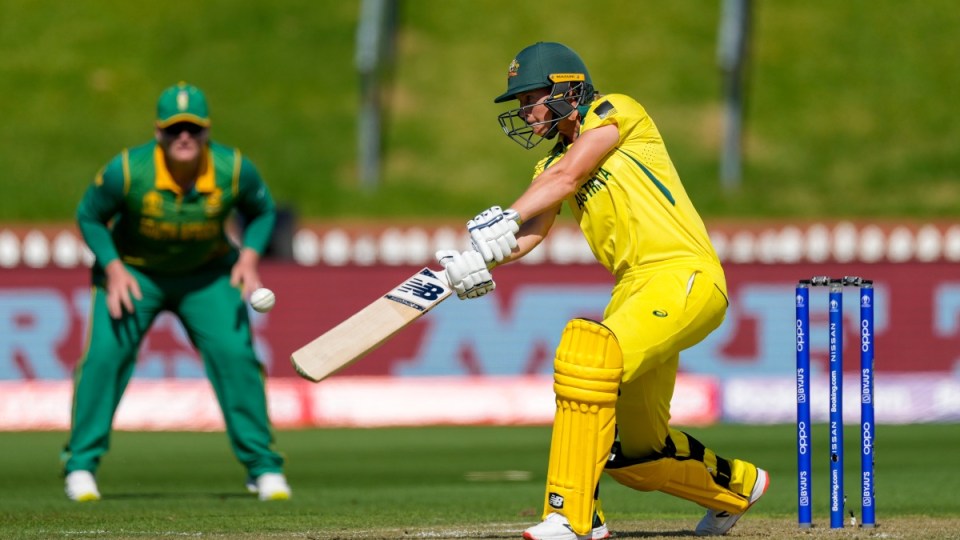 Meg Lanning cracked 135 not out to lead Australia to a fine win over South Africa at the World Cup. Photo: AAP

Fresh from a match-winning 97 against India on Saturday, Lanning was central again at Wellington’s Basin Reserve on Tuesday.

The Victorian played a composed hand early before taking flight, finding runs in all corners of the ground – including 15 fours and one six — to become the tournament’s highest scorer.

A class above, our skipper 😍pic.twitter.com/RPZtOklEWw

The Australian skipper stepped up in the absence of top-order bat Ellyse Perry, who hurt her back bowling, to score her 15th ODI century.

“It was nice to contribute,” Lanning said with typical modesty.

“We speak a lot about the top four trying to bat through and playing those match-winning innings. It was me today, it will be someone else another day, (but) it was nice to be there at the end.”

Direct hit and out! 👆

Beth Mooney is short of her crease and departs for 21.#CWC22 pic.twitter.com/jUn6SofdMg

South Africa’s sliding doors moment arrived early in Australia’s chase when Ismail was unlucky not to snare the Aussie skipper during a ferocious start.

Ismail had Alyssa Healy caught behind for one and was on the warpath, twice drawing edges from Lanning that were put down or missed behind the wicket.

Returning to the attack later in the innings, she had lost none of her intensity, taking the wicket of Tahlia McGrath and sending death stares to Lizette Lee for missing catches at slip and gully.

“She was bowling quick,” Lanning said.

“I thought (Marizanne) Kapp and Ismail bowled extremely well. I probably left more balls than I ever have.”

Rachael Haynes (17), Beth Mooney (21), McGrath (32) and Ash Gardner (22) all played supporting acts to the Lanning show, with Annabel Sutherland (22 not out) hitting the winning runs alongside her captain at the death.

Lanning won the toss and opted to field but without rested pace bowler Darcie Brown, Australia struggled to make an early breakthrough.

Laura Wolvaardt and Lee were unconcerned to be sent in, becoming the first opening pair to survive a power play against Australia with an 88-run stand.

No Australian bowler took more than a sole wicket, though Gardner produced fireworks with a one-handed screamer on the boundary to stop a six and dismiss power hitter Mignon du Preez.

The win means Australia will finish top of the group stage barring a capitulation against Bangladesh on Friday.

“Whether she’s available for the next game I’m not too sure … for her to go off obviously there’s something there as she’s a pretty tough character,” she said.

The victory gives the world No.1 a fresh world record.

After 18 straight successful chases, Lanning’s side has overtaken the Indian men’s side of 2005-06 for the most consecutive ODI wins batting second.

South Africa is still highly likely to make the semi-finals and has another chance to cement its place against West Indies on Thursday.

Meg Lanning unbeaten as Australia marches on against South Africa