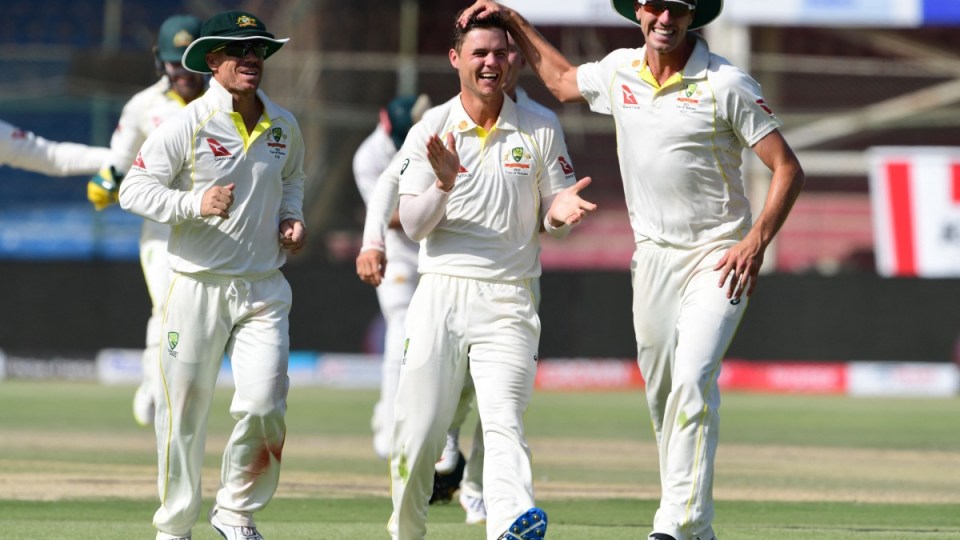 Mitchell Swepson will retain his place in the Australian team to play Pakistan in the third Test. Photo: Getty

Australia will go into the third and final Test against Pakistan unchanged from the XI that failed to capitalise on a winning position in Karachi.

Leg-spinner Mitchell Swepson, who is coming off his Test debut, will again partner veteran off-spinner Nathan Lyon for the series decider in Lahore, starting on Monday.

Australia fell three wickets short of completing a historic victory in the second Test after Pakistan survived for 172 overs to save the match.

But captain Pat Cummins is backing his bowling unit to end the deadlock and power Australia to a 1-0 series win in Australia’s first tour of Pakistan since 1998.

Cummins and left-armer Mitchell Starc will again be Australia’s front-line pacemen, with Josh Hazlewood to again miss out.

Australia ran through Pakistan for just 148 in its first innings in Karachi, but the home side dug in for the last two days of the match and Cummins’ team put down several chances in the field.

“I think the wicket here looks quite similar to the previous two Tests,” Cummins said on Sunday.

“Everyone’s pulled up really well and we gave them an extra couple of days to make sure everyone’s come up.

“We feel like we’ve got all bases covered, if needed, for reverse swing or spin late in the game.

“What’s been clear, especially this week, is how we’ve gone about it is the right way.

“I’ve been really happy with how everyone’s gone about their own work with the tactics.

“I think it’s just a matter of taking those chances, because wickets are at a premium in this series.

“We created more than 10 chances. We unfortunately didn’t take them.

“That’s going to be the challenge this week but nothing changes in how we go about it.”

Pakistan will await until right before play before captain Babar Azam makes a final call on its team.

The hosts will go into the match full of confidence after Azam (196), Mohammad Rizwan (104) and Abdullah Shafique (96) batted brilliantly to score 7-443 in their second innings in Karachi.