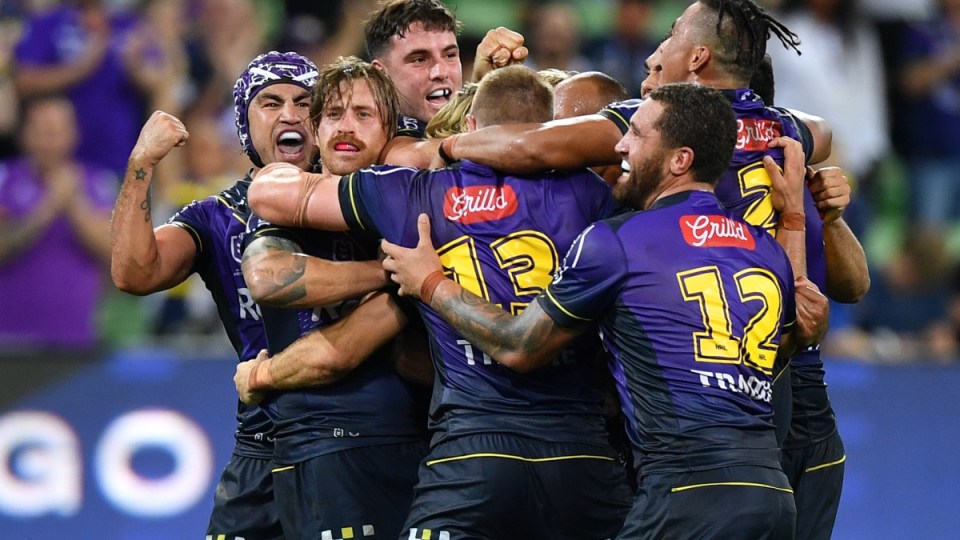 It was in reply to a stunning two-point field goal from Latrell Mitchell in the dying seconds that pushed the match into extra time for a golden-point showdown.

Making his return from suspension, the superstar fullback was mostly disappointing and missed three conversions but he stepped up when it mattered with his kick from 45 metres out sailing through the posts.

Storm had looked like it could start early celebrations with a dominant first-half display, collecting three tries to lead 14-0.

But it all unravelled in the second half as South Sydney surged back into the match, scoring three tries in nine minutes to set up a thrilling finale.

Campbell Graham’s 77th-minute try sent a hush over the Melbourne crowd who had been ready to start the celebrations for their beloved coach.

But Papenhuyzen made certain the champagne corks could start popping and continued the Rabbitohs’ winless streak in Melbourne.

Despite the win, Bellamy struggled to muster a smile, with his team surprisingly missing 40 tackles.

Storm hooker Harry Grant, who along with Cameron Munster missed the first round through suspension, was into everything and topped his team’s run metres and made 40 tackles.

The pair combined for Storm’s third try when the hooker darted out of dummy half and made an 80-metre charge before offloading to his supporting teammate.

Souths’ attack, meanwhile, looked rudderless for much of the match with veteran halfback Adam Reynolds now at Brisbane.

His replacement Lachlan Ilias kicked out on the full 40 metres out from the tryline, with Papenhuyzen scoring in the next set of six tackles.

But that was all the home side could manage as its attack fell away until the fullback got a kick away to seal its second win of the season.