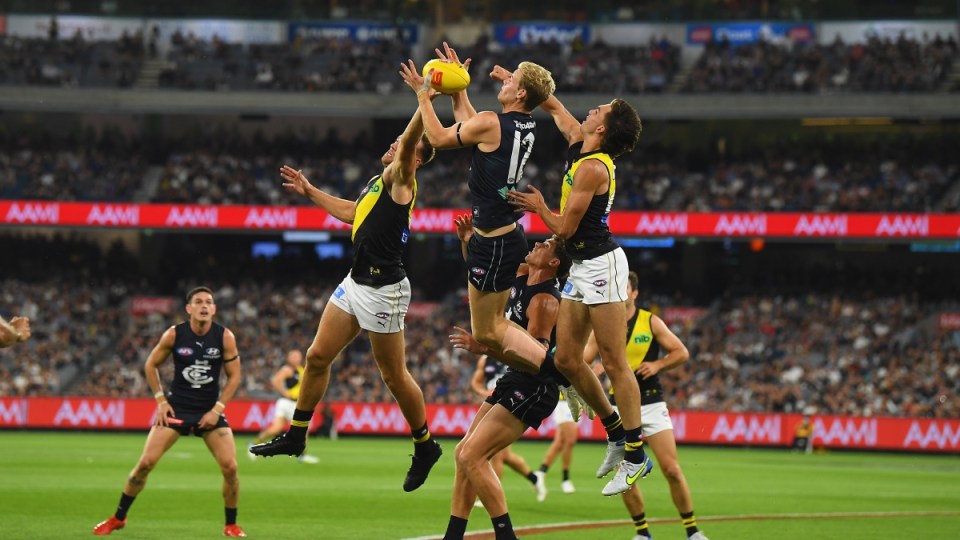 Carlton has opened its season with a 25-point win over Richmond at the MCG on Thursday. Photo: AAP

The Michael Voss-led new era at Carlton has begun in stunning fashion with a come-from-behind 25-point win over AFL rivals Richmond.

Spiritual leader Sam Docherty marked his return after a cancer battle with a team-lifting goal as the Blues twice recovered from 20-point deficits to end an 11-game losing streak against the Tigers.

Docherty’s long set shot after a 50-metre penalty brought many in the 72,179-strong crowd at the MCG to their feet.

It put the Blues eight points ahead in the shadows halftime before they were forced to fight their way back into the match in a thrilling climax.

A six-goals-to-two third quarter gave Richmond control and Shai Bolton’s third goal of the night looked to have set Damien Hardwick’s men on their way to victory early in the final term.

Captain Patrick Cripps kicked three goals from 30 disposals in the Blues’ first triumph over Richmond since the famous 2013 elimination final.

It was also Carlton’s first round-one win in a decade.

The unlucky midfield star, who managed just nine games in each of the past two seasons, left the field with a hamstring injury before half-time and was immediately replaced by substitute Hugo Ralphsmith.

Blues duo Cripps and Jacob Weitering both had injury scares when they had ankle issues seen to by medical staff during the final term, but returned to see out the match.

The two leaders were important contributors along with Adam Saad in the last quarter, as Carlton’s midfield brigade dominated out of the centre square.

The last of them set up Blues midfielder Adam Cerra to kick the sealing goal from close range.

Richmond superstar Dustin Martin started strongly in his first game since surgery to repair a lacerated kidney in July and had six disposals in the opening minutes.

He finished with 21 touches and kicked a third-quarter goal from a free.

Noah Balta started in defence for the Tigers but was swung forward and kicked two goals, as did Tom Lynch.