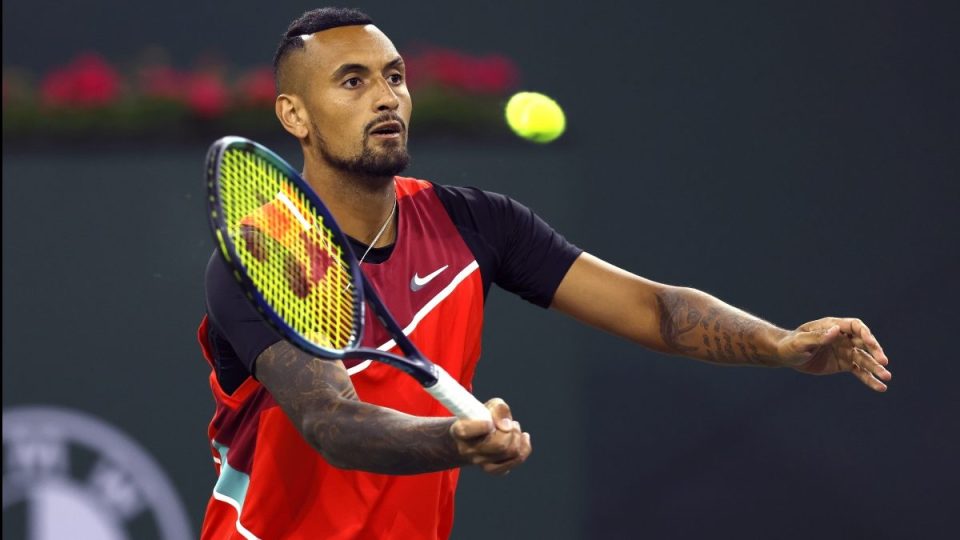 Nick Kyrgios is through to the last 16 of the BNP Parabas Open after beating No.8 seed Casper Ruud. Photo: EPA

Nick Kyrgios has made a mockery of the rankings with a merciless mauling of world No.8 Casper Ruud in a spicy grudge match at Indian Wells.

Kyrgios made it clear the bad blood between the pair remains after swatting away the Norwegian 6-4 6-4 with another serving masterclass on Tuesday.

The two hadn’t clashed since Kyrgios infamously defaulted himself after throwing a chair onto the court during the 2019 Italian Open in Rome.

Ruud called out Kyrgios afterwards, suggesting the combustible Australian deserved to be banned for six months.

Wildcard @NickKyrgios punches his ticket to the fourth round over Ruud 6-4, 6-4. Up next, Sinner#IndianWells pic.twitter.com/IOHG6m78Wj

Kyrgios posted an Instagram apology a few hours later saying emotions got the better of him, but he and Ruud continued to trade some long-range barbs.

“Hey @casperruud98 next time you have something to say, I would appreciate it you say it to my face,” Kyrgios posted on social media.

“I’m sure you wouldn’t run your mouth so much after that. Until then I will continue to rather watch paint dry then watch you play tennis. Boring af.”

Four years on and Kyrgios had the last laugh after crunching seven aces and having almost half his serves untouched to send Ruud packing after just 76 minutes.

“I hear no talking now. None. F—— none,” Kyrgios fired at his vanquished rival after storming into the last 16 at Indian Wells for the first time in five years.

Breaking Ruud early in both sets, Kyrgios was a study in focus as he has been all tournament.

The 26-year-old has yet to drop a set and conceded only 12 points on serve against Ruud.

“I wanna keep my head down… I wanna do big things,” Kyrgios said in his on-court interview.

The impressive win set up a fourth-round showdown with another of the tour’s young guns, Italian 10th seed Jannik Sinner.

Despite needing a wildcard entry and languishing at No.132 in the world after playing only sparingly the past two years during the pandemic, Kyrgios will fancy his chances against Sinner.

His win over Ruud was the Canberran’s first top-10 scalp in more than three years.

Another upset win could earn Australia’s two-time grand slam quarter-finalist a last-eight shot at Rafael Nadal, who remains unbeaten in 2022 after powering past Dan Evans in straight sets in his third-round match.