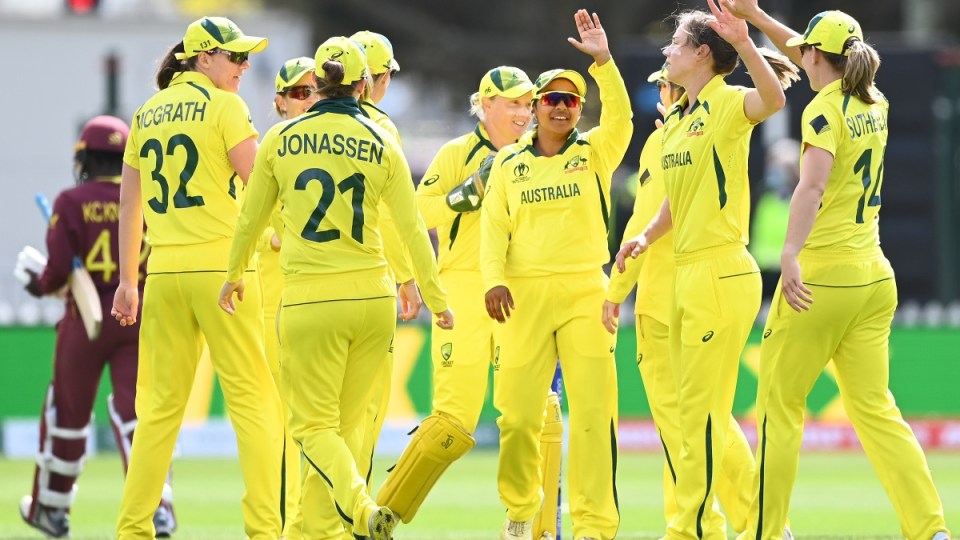 Australia was 2-7 chasing the West Indies’ meagre 131 all out at the Basin Reserve on Tuesday, with Alyssa Healy (3) and Meg Lanning (0) caught cold in the icy Wellington wind.

An Australian victory was never in serious doubt, but Haynes – the tournament’s leading run scorer – ensured there would be no capitulation, steering Australia home with an unbeaten 81.

Lanning’s side can thank its bowling group for their fourth straight win, with Ellyse Perry and Ash Gardner both taking three wickets to blitz the Windies.

She picked up career best ODI figures in today's win over the Windies 👏 #CWC22 pic.twitter.com/qyD7NBI4TR

Perry was the early destroyer in Wellington, claiming two wickets in her first over before finishing with 3-22.

All-rounder Gardner then joined in with 3-25, including the crucial dismissal of West Indies captain Stafanie Taylor.

“Early wickets up front today made a difference,” Lanning said.

“It put us in front and put them under pressure.”

The Aussies keep marching on! Rachael Haynes anchors the chase to perfection with an unbeaten 83 to power us to a seven wicket win!

Lanning changed up her side from the team that beat New Zealand by 141 runs two days earlier.

With Brown rested, Lanning threw Perry the new ball to run in with the wind in Wellington.

The veteran started with a pair of wides before swinging a beautifully pitched ball past Hayley Matthews and into the top of her off stump.

Perry had Kycia Knight caught behind the next ball, and went on to claim the dangerous Deandra Dottin for 16 in a marathon eight-over stint from the scoreboard end.

Gardner – in her second match back after catching COVID-19 – tempted Shemaine Campbelle into a rash shot and then bowled Chedean Nation to leave the Windies 5-70.

The West Indies come back for an opportunistic three, and Chinelle Henry is run out #CWC22 pic.twitter.com/jbMyVLHpP0

An unfortunate run out didn’t help the Windies, unable to build partnerships all afternoon.

Taylor spent 39 overs at the crease but lost partner after partner on her way to 50 before Gardner trapped her in front in the 41st over.

“Not the best batting display from us,” Taylor admitted.

“We didn’t assess the conditions well. Losing early wickets put a dent … I wish I had someone out there with me to build a big partnership.”

The small total should have been a cakewalk for Australia, though they gave the Windies plenty of opportunity for a boilover.

Healy looked disgusted with herself after she was caught and bowled by Hayley Matthews in the second over.

Lanning followed for a duck seven balls later, advancing down the pitch only to edge Shamilia Connell to Matthews at slip.

In need of a steadying innings, Haynes provided it – just.

She survived two lbw reviews early in the innings and a run out attempt, just before Perry fell for 10, caught again by Matthews while driving Chinelle Henry.

Haynes offered Taylor and Shakera Selman chances in the field that neither could take, combining with Beth Mooney for a 74-run stand as Australia reached their total three down in the 31st over.

“Rach and Moons at the back end did extremely well,” Lanning said.

“Losing early wickets is not ideal, but what we have shown throughout the tournament is we can rebuild and really push towards the end.”

Australia sits top of the standings, with South Africa – with three wins from three – set to join it if it can edge New Zealand in Hamilton on Thursday.

Australia’s next assignment is the last team to beat it at a World Cup; India, on Saturday at Eden Park in Auckland.