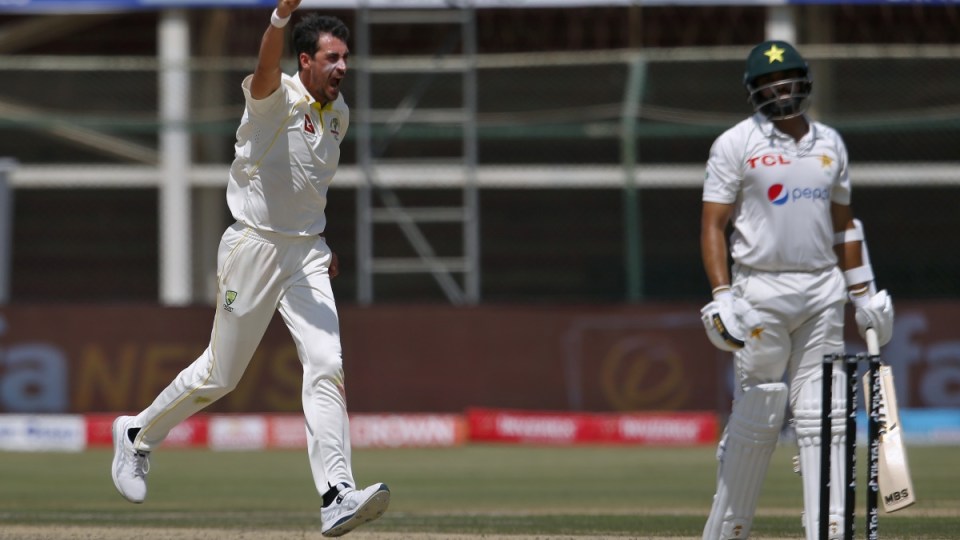 Mitchell Starc sparked a Pakistan collapse on Monday with the hosts all out for 148 in reply to 9(dec)-556. Photo: AP

Pace ace Mitchell Starc’s masterly spell of reverse swing bowling has skittled Pakistan to put Australia on the cusp of an historic Test win in Karachi.

After Australia posted an imposing 9(dec)-556, a Starc triple treat helped blast Pakistan out for a meagre 148.

The visitors chose not to enforce the follow-on and reached 1-81, a lead of 489 runs, at stumps on Monday’s third day of play.

The Australians, with Usman Khawaja not out 35 and Marnus Labuschagne unbeaten on 37, are in sight of their first win in nine Karachi Tests, and a 1-0 series lead.

Starc ripped through Pakistan’s top-order, his 3-29 featuring wickets on consecutive balls – he was on a hat-trick for the 15th time in international cricket.

Starc narrowly missed the rare feat when Mohammad Rizwan was comprehensively beaten outside off stump from his milestone attempt.

Starc bended the ball both ways during a spectacular Pakistan batting crash as the hosts lost 9-92.

Sklipper Babar Azam (36) was the only batsman to pass 20 and the last pair – No.10 Nauman Ali and No.11 Shaheen Shah Afridi – featured in the highest partnership of the innings, 32 runs.

But the Australian skipper, in his next over, got his man when Rizwan (six) edged to wicketkeeper Alex Carey and, two overs later, all-rounder Green trapped Faheem Ashraf (four) lbw before leaving the field with a thumb injury – he later returned.

Green’s temporary absence brought Starc back into the attack and the paceman removed Sajid Khan (five), who feathered an edge to a sharp-hearing Carey: The gloveman demanded a review despite Starc and other Australians signalling they didn’t hear an edge after an initial not-out verdict.

Soon after, Swepson took his first Test wicket, and the leg-spinner added another after Pakistan’s final pair produced an innings-high stand.

Australia then opted to bat again – since famously losing to India in Kolkata in 2001 when enforcing the follow-on, Australia has only ordered its opposition to follow on 14 times from 39 opportunities.

Since that Kolkata Test, Australia has 24 wins from 24 Tests when not enforcing the follow on and batting again.

Who was the King? How Elvis Presley devoted his life to a consuming passion
England Women’s World Cup defence on shaky ground with third loss
Today's Stories