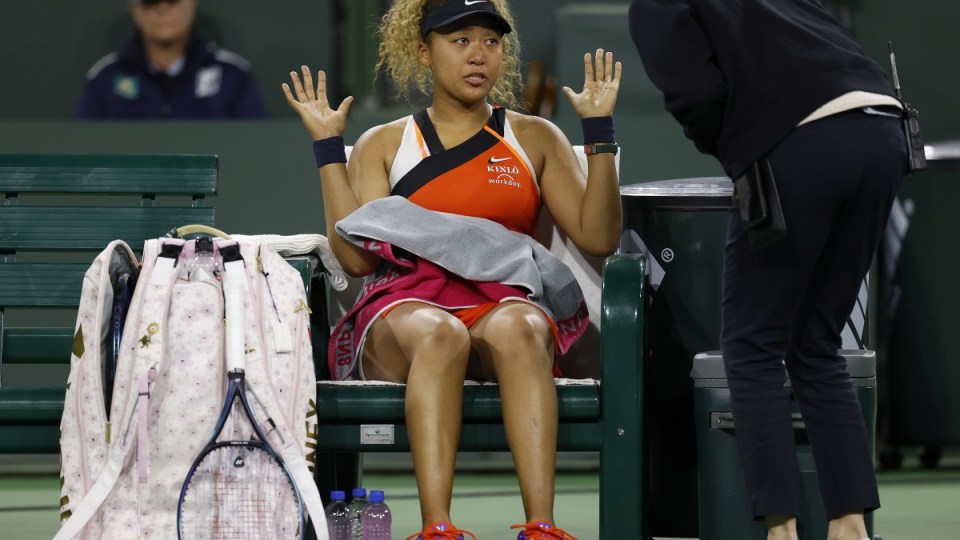 Rattled by a derogatory shout from a spectator, Naomi Osaka never recovered as she went on to lose 6-0 6-4 to Veronika Kudermetova in the second round of the WTA Indian Wells tournament.

Two-time Australian Open champion Osaka trailed in the first set when a person in the stands apparently shouted, “Osaka, you suck.”

The Japanese star approached the chair umpire to ask that something be done.

But the umpire explained that she didn’t know who it was and could not take any action.

Naomi Osaka asking chair umpire if she can borrow umpires mic to talk to the woman in the crowd. And her convo with supervisor. Naomi was crying #IndianWells pic.twitter.com/lehS7qi8EZ

Osaka later made the unusual request to use the umpire’s microphone to address the crowd, which did not happen.

A supervisor came on court for a prolonged discussion with Osaka.

The supervisor told the umpire “if it happens again, we’re going to find him”.

After the match, former world No.1 Osaka spoke to the crowd with tears streaming down her face.

She said the reason the fan upset her was that she had recently seen a video of Serena and Venus Williams being heckled by fans at Indian Wells in 2001.

The sisters boycotted the tournament for years until eventually returning.

“I’ve been heckled before and it didn’t really bother me,” Osaka said.

“But being heckled here. I’ve watched video of Venus and Serena get heckled here and if you’ve never watched it, you should watch it. And I don’t know why, but it went into my head and got replayed a lot.

“I just want to say thank you and congratulations.”

Osaka has said she struggled with depression after winning the 2018 US Open.

She withdrew from last year’s French Open to tend to her mental health and also took a break from the sport following her upset loss at last year’s US Open.

She said she was in a great place emotionally coming into the tournament.