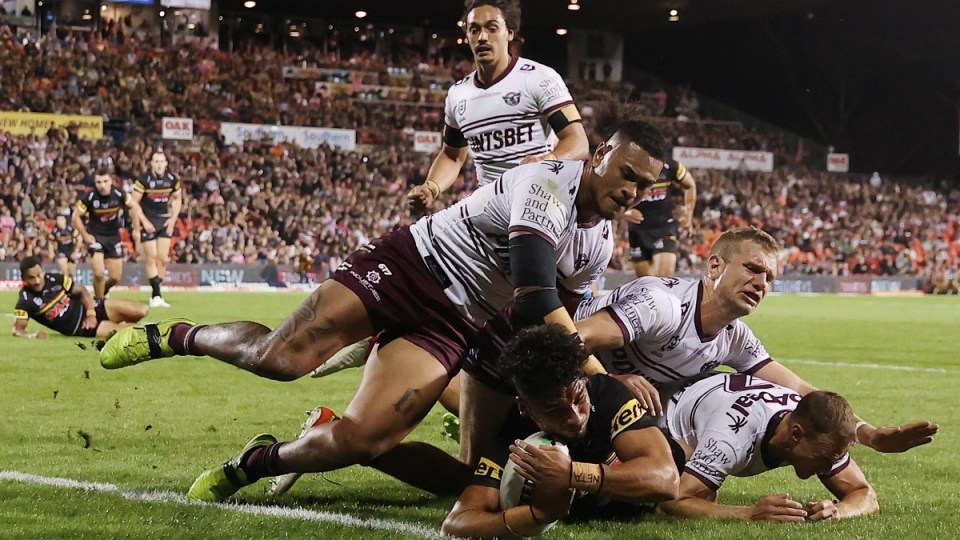 Penrith’s premiership party has extended to March as it celebrated its return home after nine months on the road with a 28-6 flogging of Manly.

After an off-season spent stressing over 2022 being a new campaign, Penrith partied like it was 2021 to start the NRL season in emphatic fashion.

In an electric start to the year on Thursday, Penrith was in control from the opening minutes as it dominated possession and field position.

Viliame Kikau starred as he played a hand in two tries and monstered Manly on the left, while lock Isaah Yeo was typically pivotal.

New face Izack Tago also scored a try in his first game at left centre, with the position a magnet for points at Penrith in the past two seasons.

Arguably more impressive than anything was the way the Panthers shut down Tom Trbojevic, with the Dally M medallist, despite setting up Manly’s try, only breaking the line once late in the game.

The scary thing for Penrith’s rivals will also be that, even without Cleary, the scoreline could have been more dominant after it was controversially denied two tries for obstructions.

Kikau, one of those players to sign elsewhere for next year, was instrumental from the start, setting up Penrith’s first try when he offloaded and Tago found space to score.

The second-rower had a hand in another try early in the second half, running the ball on the last tackle and offloading for Jarome Luai to score.

O’Sullivan’s golden moment came in the first half, providing a long cut-out ball for Stephen Crichton to step his way over.

“He’d prepared for this game for the past three months,” coach Ivan Cleary said of O’Sullivan.

“I’m really happy for him. Penrith boy, had to leave to look elsewhere. He’s been in a few different systems.

“He’s a real good footy head. Loves the game, loves learning. Came back here and has done everything we asked of him.”

Apisai Koroisau and Liam Martin also claimed tries in the second half, as Penrith rolled through Manly with 73 per cent of the game played in its half.

For Manly, it was a case of same old problems against the best teams.

The Sea Eagles conceded an average of 34 points per game against the three sides who finished above them last year, with Thursday revealing the same issues.

Their few chances in Penrith’s half mainly came off the back of penalties, with their forwards battling to get into the game and Penrith controlling the ruck.

“It felt like we were definitely cramped in our corner for a fair bit,” captain Daly Cherry-Evans said.

“That’s a credit to the Panthers … But we have to find a way to get out.”

They could also have judiciary trouble, with Haumole Olakau’atu on report for late contact and his likely back-row replacement Karl Lawton suffering a bad head knock.

Trbojevic had a role in the Sea Eagles’ only try when his brother Jake dummied and ran from dummy-half at the end of the first half.

Kieran Foran helped put the fullback into space before Ethan Bullemor loomed up on the outside to score.