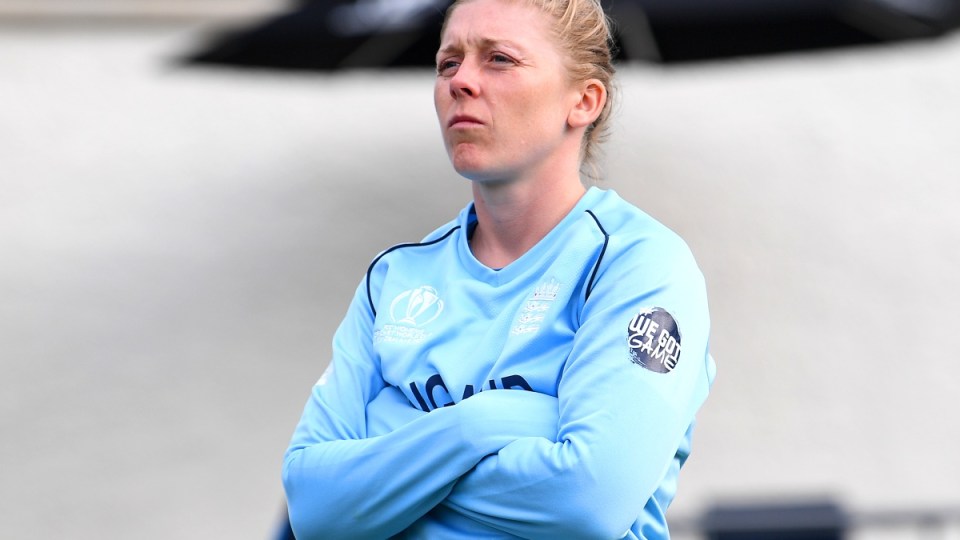 England captain Heather Knight looks dejected after her team's loss to the West Indies in Dunedin on Wednesday. Photo: Getty

Heather Knight admits England is “fighting for our lives” at the Women’s World Cup after a shock seven-run loss to the West Indies.

England slumped to a second straight defeat in New Zealand, failing to chase down the 226 victory target to leave its World Cup campaign in the balance.

Shemaine Campbelle’s 66 and Chedean Nation’s unbeaten 49 helped steer the West Indies to 6-225, but England faltered on an eminently achievable chase.

England skipper Knight called on her side to sharpen focus to shake off a demoralising opening to the tournament.

A disappointing performance in our second #CWC22 game.

“We need to have a knockout mindset now,” Knight said.

“The next game is crucial. So we have to bring that mindset of needing to win every game and that simplifies things.

“Because at the moment we’re fighting for our lives in this tournament.

“There’s a lot of experience in this group, we’ve lost games before and we know we can’t dwell on defeats too much.”

Congratulations West Indies women on an incredible win 👏🏼 Not for nothing they say catches win matches. This catch from Deandra Dottin will take some beating! #WIvENG #CWC22 pic.twitter.com/6rkKJ7xI98

But England’s middle order failed to launch, teeing up a second quick disappointment at the top of the competition.

England will face South Africa in Tauranga on Monday, knowing full well improvements must come, and fast, to turn the current troubles on their head.

“First and foremost, we can’t linger on it too much,” Knight said.

“We’ve made it tricky for ourselves, but there’s no way are we out of this World Cup yet.

“So we have to focus on the next game, get what we can from this game, park it and move on to be ready for South Africa.

“We were clear on our plans – we just didn’t quite execute, at times.

“They finished pretty strongly, and it’s something we can do better with the last 10 overs.

“It’s something we’ll look at and keep improving, our back-end stuff.”

The islanders used eight bowlers to keep England at bay after a screamer of a one-handed catch from Deandra Dottin off the bowling of Connell (3-38) removed Lauren Winfield-Hill for 12 to give them their first breakthrough.

The England tailenders, rallied by Ecclestone’s 33 not out, still looked like they would get the job done, however.

Quite a bit to dissect after another #CWC22 thriller today!https://t.co/r41xqKk7aU

New Zealand had thought the same heading into the final over needing six runs last Friday only for Dottin to dismiss its last three batters.

This time it was spinner Anisa Mohammed who made the key intervention in the 48th over, running out Kate Cross for 27 and three balls later bowling Anya Shrubsole for a duck to leave England short.

“It is not something I like,” West Indies captain Stafanie Taylor said of the dramatic finishes.

“It was a bit nerve-wracking for me ,but I’m really happy that we turned out on the right side.”