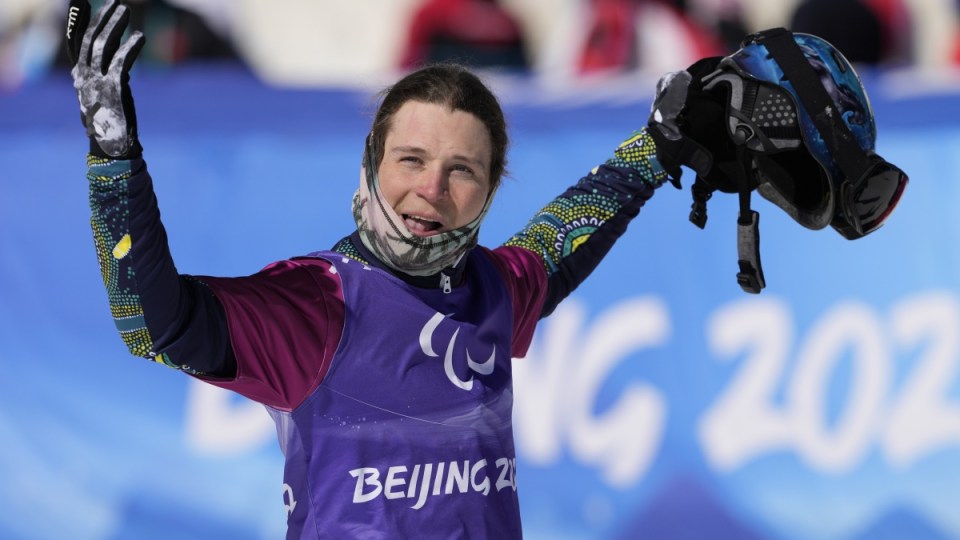 Ben Tudhope will compete for another medal when the snowboard banked slalom is held on Friday. Photo: Getty

Ben Tudhope’s para snowboard banked slalom has been brought forward from Saturday to Friday, while multiple para alpine skiing events have been rescheduled as temperatures warm up at a Winter Paralympics held in spring.

Zhangjiakou is forecast to be 14 degrees on Friday but 17 degrees on Saturday.

“Due to high risk of rainfall and snow melting, CSCC has made the decision to advance Para Snowboard M/W Finals,” management said in a statement.

Tudhope is aiming for his second medal at Zhangjiakou Genting Snow Park after earning bronze in Monday’s snowboard cross.

This video of @BenTudhope's family and friends watching his #ParaSnowboard Cross Final from the Manly Skiff Club is everything 💛💚#ReadySetSnow #Beijing2022 #WinterParalympics@SnowAust | @7sport | @Paralympics pic.twitter.com/GOFFPPMJeh

Tudhope’s event now clashes with that of para alpine skiers Melissa Perrine and Rae Anderson, who begin their campaigns in Friday’s giant slalom in Yanqing.

It was the second time Australians had been affected by weather-related changes after the men’s super combined was previously brought forward from Tuesday to Monday.

Later on Wednesday, the remainder of the para alpine skiing schedule was also changed with authorities citing “high temperature and risk of snow melting”.

Yanqing is forecast to hit 23 degrees on Thursday, 13 on Friday, 20 on Saturday and 13 on Sunday.

Both runs of the women’s giant slalom on Friday were also brought forward by 90 minutes, with the first run to now commence at 8.30am and the second at 11.45am.

A day in the life of a Winter Paralympian. @samtait_7 takes us behind the scenes, from fuelling up in the Athletes' Village, to hitting the slopes for training and talking strategy ahead of the Giant Slalom.#ReadySetSnow #Beijing202 #WinterParalympics | @7sport | @snowaust pic.twitter.com/9SIBHCMu5j

Meanwhile the men’s and women’s slalom competitions have swapped days.

The women’s slalom was due to be held on Sunday but the first run will now be at 8.30am Saturday, with the second at 11.45am.

The men’s competition has been pushed back a day with the first and second runs to commence at 8.30am and 12.30pm respectively.

Congratulations on their success and achievements at the #Beijing2022 #Paralympics Winter Games! We are so proud of you all!

All of Australia’s para alpine skiers are affected by the change in schedules.

Mitch Gourley, Sam Tait, Josh Hanlon, Patrick Jensen and sighted guide Amelia Hodgson are all competing in their respective men’s giant slalom events, with Tait the only one not in slalom.