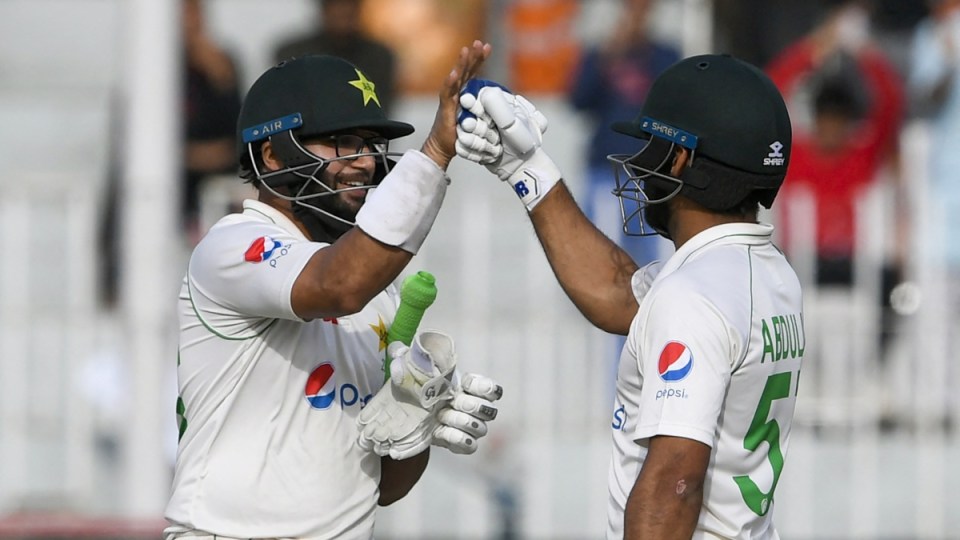 Imam-ul-Haq has joined one of the most illustrious clubs in Test cricket, becoming just the 12th man to hit twin centuries against Australia.

Recalled to the team for this month’s series after two years out, the opener made his chance count with his first Test ton with 157 in the first innings.

He then backed it up with another hundred in the second, bringing up three figures when he lofted Travis Head to long off late on day five.

At stumps, Pakistan finished at 0-250 in its second innings for the much-expected result of a draw.

The 26-year-old’s chance in the team only came after a heart issue suffered by Abid Ali last December, with Imam-ul-Haq’s weight of runs at first-class level ensuring him another chance.

It came on a dominant final day for Pakistan in Rawalpindi, with fellow opener Abdullah Shafique also scoring his maiden Test century.

Aged 22, Shafique reached triple figures when he turned Cameron Green around the corner to fine leg in just his sixth first-class match after enduring a nervous tea break stuck on 99.

In doing so the duo became just the third Pakistan pairing to score century opening stands in both innings of a Test, and the first from the country to do so against Australia.

The pair’s day was made easier by Australia opting to limit the work of the majority of their quicks, with the match long destined to be a draw and just four days out to the second Test.

However, that will matter little to the openers with Imam-ul-haq offering the only chance of the innings when he was given not out after edging Lyon on 94, which Australia did not review.

Prior to that Imam had produced the two best shots of the day by twice hitting Lyon back over his head for six.

The second in the middle session of Tuesday was particularly big, going well back into the stand.

Shafique’s best strike came after reaching his hundred, punching Cameron Green for four through backward point off the back foot.