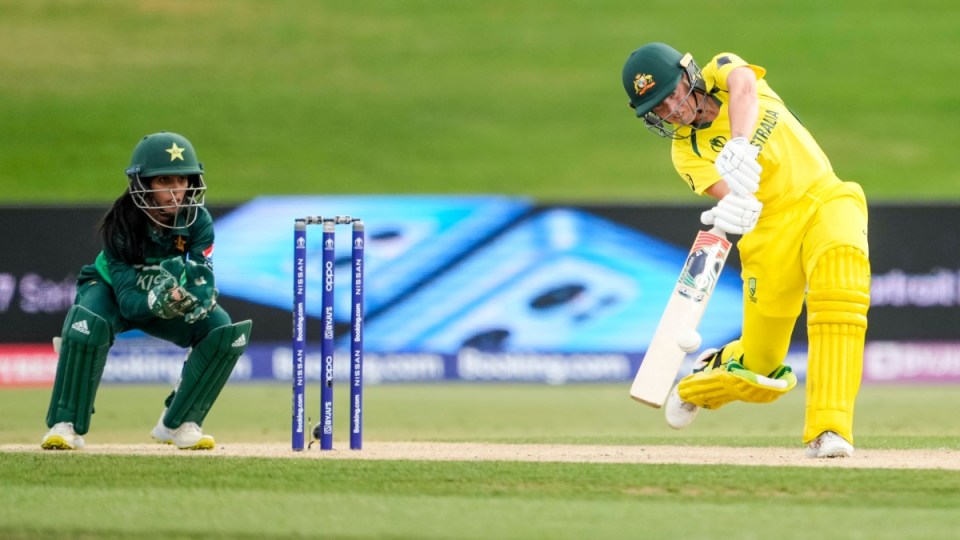 Alyssa Healy made 72 as Australia chased down Pakistan's 6-190 in their Women's World Cup clash. Photo: AAP

Australia has raced to the top of the Women’s World Cup standings with a swift seven-wicket win over Pakistan.

Pakistan improved from its first-up defeat of India and rallied from 4-44 thanks to a 99-run stand from Aliya Riaz and Bismah Maroof.

With her seven-month-old daughter Fatima in the stands, Maroof struck an unbeaten 78, repelling the spin-heavy Australian attack.

Beth Mooney finishes the job with a lovely cover drive and the Aussies make it two-from-two in the World Cup after a seven-wicket win over Pakistan!

However, Australia’s top order made short work of the below-par total,  with Healy making her best World Cup score.

The tournament favourites were always likely to triumph against the World Cup’s lowest-ranked side and made sure of it with a professional display at Tauranga’s Bay Oval.

Australia made two changes from its first-up win over England on Sunday, dropping Darcie Brown and resting Tahlia McGrath, who had a sore heel.

Into the side came Nicola Carey, making her World Cup debut, and spinner Amanda-Jade Wellington who was favoured on the turning wicket.

But it was Australia’s seam attack that did the early damage.

The 99-run stand between Bismah Maroof and Aliya Riaz today was the highest partnership for #TeamPakistan at Women's World Cup 🔥#CWC22 pic.twitter.com/PeE945WDxW

Megan Schutt and Ellyse Perry removed openers Sidhra Amin and Nahida Khan, both caught in the slips cordon to leave Pakistan reeling at 2-11.

National team bolter Alana King, fresh from her star turn against England, then produced another stunner to dismiss Omaima Sohail.

The leg-spinner, Australia’s best bowler with 2-24, squeezed a delivery through Sohail’s bat and pad that struck the top of the middle stump.

Wellington then took her first international wicket in four years, with Lanning called into action in the slips again to pouch a heavy outside edge.

Carey ended their stand in the 45th over, trapping Riaz in front.

In reply, Australia’s openers enjoyed lives when they were dropped in the field before holing out.

Healy was dropped at mid-wicket off Anam Amin’s spin on eight, while in the next over Nida Dar put down a simple chance to snare early innings aggressor Rachael Haynes off her own bowling.

Haynes fell shortly after for 34 off 34 balls, while Healy cashed in before finding a fielder at long-on.

Lanning started slowly scoring three off 20 but improved to 35 off 37, before chopping on a Sohail delivery.

Beth Mooney (23 not out off 26 balls) and Ellyse Perry (26 not out off 33 balls) then finished off Pakistan, Mooney sealing victory with a superb cover drive.

Australia’s next assignment is against hosts New Zealand in Wellington on Sunday, while Pakistan will stay in Tauranga as it hunts a first win of the tournament against South Africa on Friday.