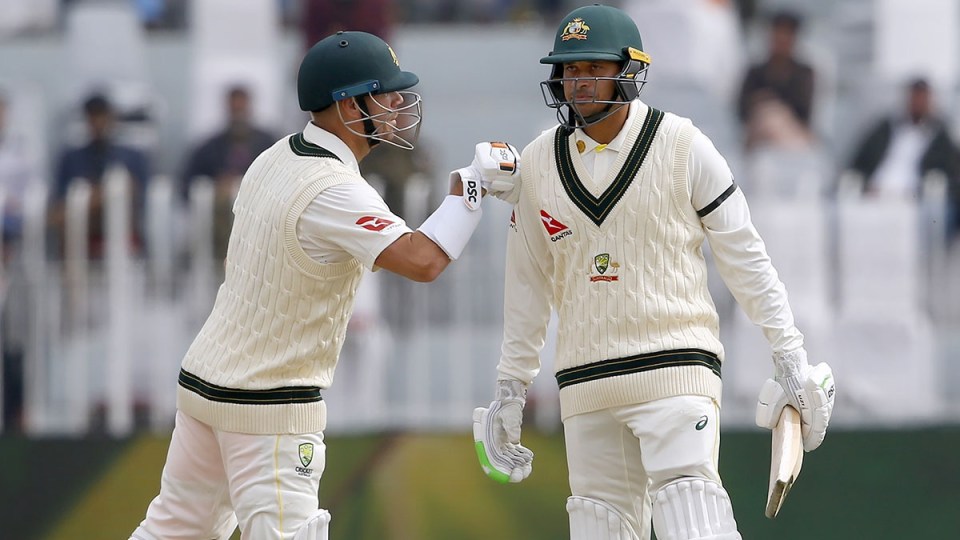 David Warner and Usman Khawaja set Australia on its way to a healthy reply to Pakistan's massive total. Photo: AP

Australia has set its sights on somehow turning the Rawalpindi runfest into a contest after reaching 2-271 at stumps on a shortened day three of the first Test in reply to Pakistan’s 4(dec)-476.

With bat dominating ball in near-record fashion, Usman Khawaja narrowly missed out on a century in his first match in his country of birth with 97.

David Warner also struck 68 as part of a 156-run opening stand between the pair, while Marnus Labuschagne was 69 not out when bad light stopped play shortly after tea.

Steve Smith was alongside him on 24, with the pair 32 runs short of the fifth 100-run partnership of the match.

As a show of how much bat has ruled on the first three days, the average runs scored per wicket now sits at 124.5 and on track to be the second highest of all-time.

Both sides face an uphill battle to force a result on the flat wicket, but Australia’s run rate of 3.71 on the third day has at least given it a chance.

Australia has made clear its plan is to bat well into day four, still eyeing a chance to win if it could build a sizeable lead and bowl at Pakistan on the final day.

And Khawaja was the man to heed the call, as he and Warner scored at more than four an over in the first session.

Warner battled through the early stages, but Khawaja made an immediate statement by putting the pressure back on Pakistan’s quicks.

He hit 15 boundaries in his 97, reverse-sweeping spinners and at one stage backing away to upper-cut Naseem Shah through backward point.

The 35-year-old was dropped twice on 22 and 62, but responded to both chances by hitting boundaries the following balls.

But he didn’t survive a third life, out on review when he tried to reverse-sweep Nauman Ali but only gloved it to Imam-ul-Haq at bat pad.

Usman Khawaja is removed on 97, misses his Test century in his maiden in innings on the ground he played as a young boy. He was born almost 30KMs from Pindi Stadium, he returned today to play an absolutely fantastic knock. What a story! #PAKvAUS pic.twitter.com/O3XNZ5B6QC

Warner, meanwhile, wore two blows to his body from Naseem and almost had one delivery from Shaheen Shah Afridi take his edge before he had even scored.

But he exploded with three boundaries in one over from Iftikhar Ahmed, reaching his half-century with his first as he began to put away anything wide.

He eventually fell trying to go back and cut a ball that was too full from Sajid Khan, as it stayed low and took his middle and off stump.

Labuschagne’s strokeplay then took over, getting off the mark with a glorious cover drive that sent a Naseem half-volley to the rope.

It was one of four boundaries he hit off the quick, while his quirkiest four came when he went to reverse-sweep Sajid but changed his shot mid-delivery to a conventional sweep.

If Australia were to pull off an unlikely win, it would mark its greatest comeback after conceding so many runs in the first innings since Shane Warne engineered an Ashes Test win in Adelaide in 2006.