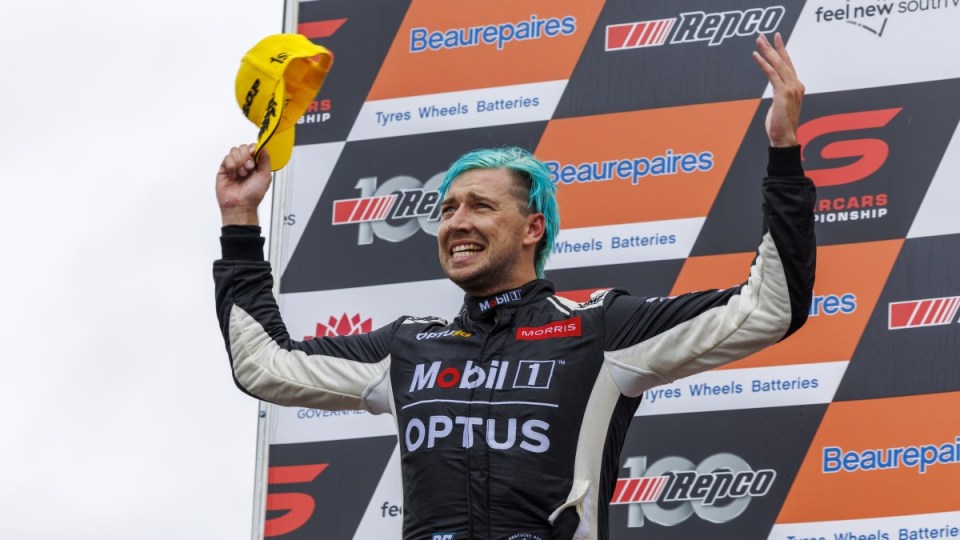 For the first time in his Supercars career, Holden’s Chaz Mostert holds the championship lead.

The Walkinshaw Andretti United star’s victory in Sunday’s 300-kilometre race amid wet and wild conditions at Sydney Motorsport Park was enough for the Bathurst champion to achieve that notable milestone.

Mostert survived a late restart to hold off the challenge of Erebus Motorsport’s Brodie Kostecki and end the season-opening event 12 points clear on the title standings.

“I never thought I’d ever have an orange number on my car after all these years,” Mostert told Fox Sports.

“I know it’s round one, but I mean, it’s just cool to tick that box off the list.”

Kostecki, who earlier in the day claimed the first pole position of his Supercars career, came home second in an impressive result for the 24-year-old.

Van Gisbergen’s sixth-place finish was a sensational result after the Red Bull Ampol Racing star had earlier found himself being lapped by the race leaders after an early spin off the track.

Despite the threat of rain throughout the race, it wasn’t until the closing stages that the heavens opened.

That sparked a run to the pits to strap on wet tyres but Mostert, who snatched the lead with 26 laps to go, simply couldn’t be caught by his rivals.

A gamble by Matt Stone Racing’s Jack Le Brock to remain on the track on slick tyres ended with his Truck Assist Commodore sliding into a gravel pit with seven laps to go.

That sparked a safety car to set up a three-lap sprint to the finish line but, again, Mostert was too quick to be headed.

The wet conditions claimed one last victim when De Pasquale spun off the track and clipped a wall after the finish line but it didn’t stop the Ford star celebrating on the podium.

The next stop of the 2022 Supercars championship is at Symmons Plains in Tasmania from March 26.