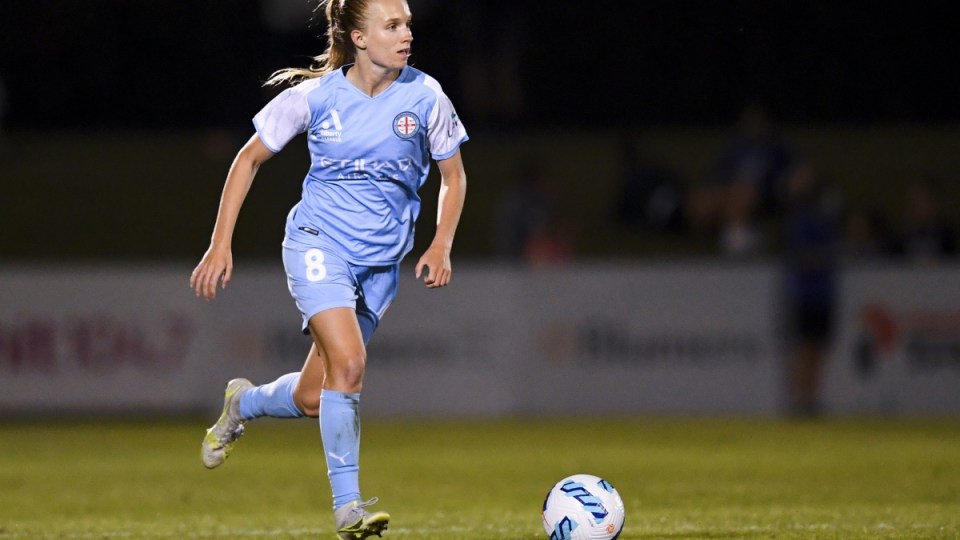 Kaitlyn Torpey opened the scoring for Melbourne City in its 2-0 ALW win over the Newcastle Jets. Photo: AAP

Melbourne City’s slim hopes of an A-League Women premiership remain alive after a hard-fought 2-0 win over a spirited Newcastle Jets at ABD Stadium.

Goals from Kaitlyn Torpey and Hannah Wilkinson secured the points and moved them back into second spot on the ladder on .

The home side looked shaky early on Tuesday, however, when an early defensive lapse from Emma Checker allowed Sophie Harding to burst through and hit City’s post.

City took the lead when Torpey pounced on attempts to clear away a Rhianna Pollicina pass and netted from range in the 16th minute, but it was a rare moment of incisiveness from the hosts in a frustrating opening stanza.

Looking to mark Cass Davis’ 109th straight appearance – an Australian national league record for men or women – with a win, the Jets had the better of the half’s remaining chances.

Their most notable came when Harding seized on a wayward pass from Torpey and rounded Checker to go clear on goal in the 30th minute, only to send her shot straight at Melissa Barbieri.

But City doubled its lead four minutes into the second half after Pollicina collected Claire Coelho’s save of her own shot and dinked a cross for Wilkinson to head home from close range.

Back from international duty with New Zealand, it was Wilkinson’s 11th goal of the season and tied Larissa Crummer for the most scored in a single season for City.

“We just put in an average performance in the first half,” City coach Rado Vidosic said post-game. “I think we were lucky to be 1-0 up. But in the second half, we were much better.

“Credit to the girls, they did much better in the second half. I’m nowhere near happy but it is what it is.

“We have one more game then a week to prepare (for finals).”

The Kiwi had a golden chance to claim the record in injury time but headed straight at Coelho.

Harding popped up again with the best of the Jets’ second-half chances in the 52nd but her well-struck effort was well-saved.

It was a frustrating end for the Jets and icon Davis in her milestone game.

“I honestly can’t believe she’s got to 109 games without being injured,” Jets coach Ash Wilson said.

“It’s a testament to how she prepares herself.

“She’s been a fantastic leader. I’ve seen her step out and the young girls take a lot from her.

“I’m very proud of her. It couldn’t have happened to a better person.”

Wellington secured just its second A-League Women win and remain in the mix to avoid the wooden spoon after edging Western Sydney 3-2.

On a sodden Sydney evening, Phoenix deserved full points despite the Wanderers having ample opportunities late in Tuesday’s clash.

Wanderers midfielder Ashlie Crofts had them on the board after just two minutes with a glancing header.

Despite the heavy field, the match entertained with frequent end-to-end forays, Libby Copus-Brown troubling Phoenix with her drive through the centre of the park while the visitors were well served out wide by Ava Pritchard.

In its debut season Phoenix (seven points) is level with the Wanderers but sits behind the Sydneysiders on goal difference in 10th.