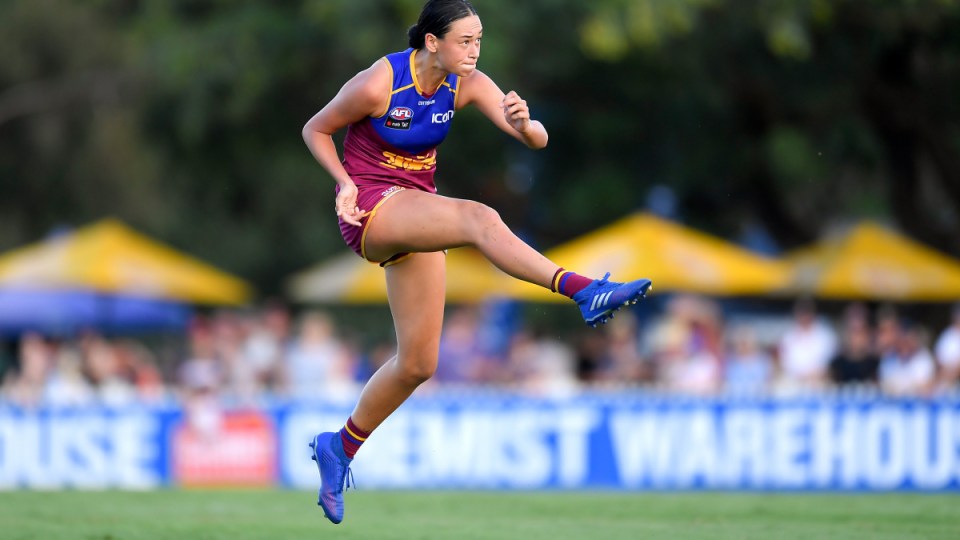 Brisbane has set a record for the biggest AFLW total but fell agonisingly short of reaching triple figures in a 74-point pummelling of West Coast.

The Lions had the chance to become the first team to reach triple figures, but Greta Bodey’s 38m set shot with less than three minutes remaining drifted just wide.

The margin was also the biggest in AFLW, bettering the Bulldogs’ 73-point win over Carlton in 2018.

“It’s a nice little milestone for our group,” Brisbane coach Craig Starcevich said of the records.

“If you want to be known as one of the better teams in the comp, you’re going to have to come up with those types of performances somewhere in your journey.

“At least this group will have that little feather in their cap – that they’ve been able to do something that no one else has.

“There’s a lot of people back home who have had a pretty ordinary weekend (with the floods), so we were happy to give them a little ray of sunshine given everything that’s going on in Brisbane at the moment.”

The result improved Brisbane’s record to 6-2, lifting it to fourth spot and moving it to within a win of second-placed Melbourne.

The 30 percentage points they gained could prove crucial in the race for top-two and top-four berths.

Eagles coach Michael Prior said some players would be fighting for their futures in the final two rounds of the season.

“There’s a lot, and that’s just the honest truth,” Prior said.

“There’s quite a few girls who aren’t in contract, and the next two weeks are really important.

“A few of them took a backward step, but there’s a couple of games to go that they can show they want to be here and want to take this club forward.”

There were a number of records set in the half-time stats.

The 46-point margin was the biggest half-time lead, West Coast’s two inside-50 entries was the lowest in a first half, and Bates’ 22 disposals was the highest first-half tally.

Brisbane’s Orla O’Dwyer appeared to dislocate her right shoulder in a tackle, but Starcevich said O’Dwyer suffered a similar injury during the pre-season and was able to return in a matter of days.