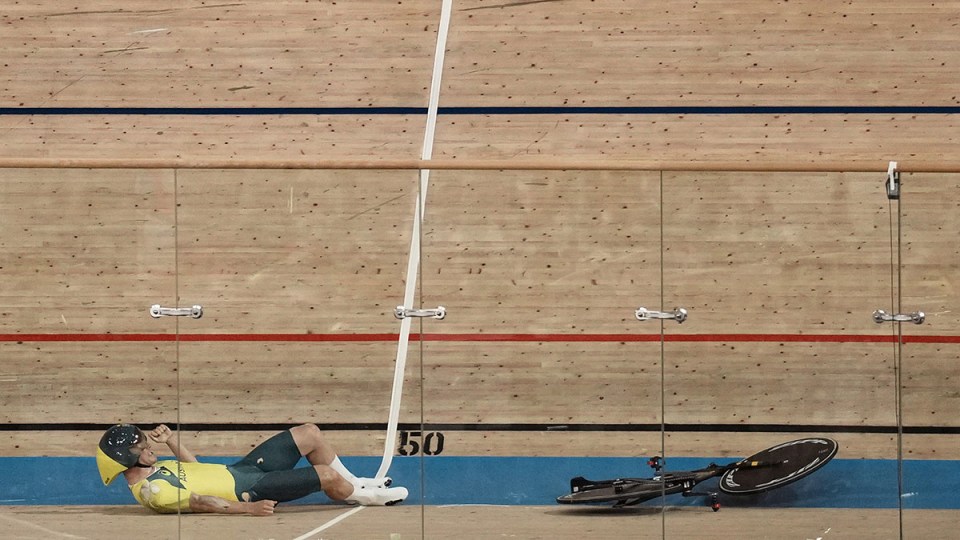 A report into Alex Porter's high-speed crash at the Tokyo Olympics has made 14 recommendations. Photo: AP

AusCycling has apologised after a scathing report into Alex Porter’s snapping handlebar debacle at the Tokyo Olympics.

The report found the national track cycling team provided inaccurate specifications, had sparse consultations with the handlebar manufacturer and team policies and procedures were scant.

It has made 14 recommendations for AusCycling and five for the manufacturer, Melbourne-based company Bastion Cycles.

The handlebar on Porter’s bike dramatically snapped off early in the team pursuit qualifying ride at last year’s Games, sending him face-planting onto the velodrome boards at about 60km/h.

AusCycling will introduce a range of measures in response to the findings of the independent report into the equipment failure that occurred in the qualifying round of the Men's Team Pursuit at the Tokyo Olympic Games. https://t.co/wd6IHAN02Y

Porter suffered numerous wounds, including friction burns to his face, but he avoided more serious injuries.

The team was also lucky that Porter was at the rear of the four-man paceline when his accident happened, otherwise he would have brought down one or more teammates.

The team pursuit squad rallied to win the bronze medal, but the incident cruelled its hopes of gold.

Porter’s crash came to symbolise another poor performance from the Australian track cycling team at the Olympics.

The team pursuit bronze was its only medal – Australia’s lowest tally at an Olympic velodrome since the 1980 Moscow Games.

“We apologise to Alex and his fellow riders, to the broader Australian Olympic team and to the Australian public, all of whom were entitled to expect better,” AusCycling chief executive Marne Fechner said.

“The recommendations are very clear, in that there’s a complete overhaul required in how we go about our business.”

Porter said in an AusCycling statement that he accepted the findings.

“I acknowledge the work that has gone into the report and the many people who have contributed to a better understanding of what happened in Tokyo,” Porter said.

“I also appreciate AusCycling’s transparency and acknowledge their apology to all of us who rode in the team pursuit.”

“The first was an inadequate specification for custom-built handlebars, the second was the failure to conduct adequate fatigue testing,” AusCycling said.

“The report found that a lack of adequate processes and policies meant that the issues weren’t detected and rectified before the team raced at the Games.”

Although the report sheeted much of the blame for the snapped part to AusCycling, it also called on Bastion to review design and production quality assurance procedures among the five recommendations for the company.

“You don’t fail until you give up. We have always said that no matter what the results of the report were, we would treat this as an opportunity to learn and become stronger as people, and as an organisation,” Bastion co-founder Ben Schultz said.

“In team sport, we win together, lose together and critically, learn together. Bastion is committed to working with AusCycling and the team as we address each of the recommendations and work towards the future.”