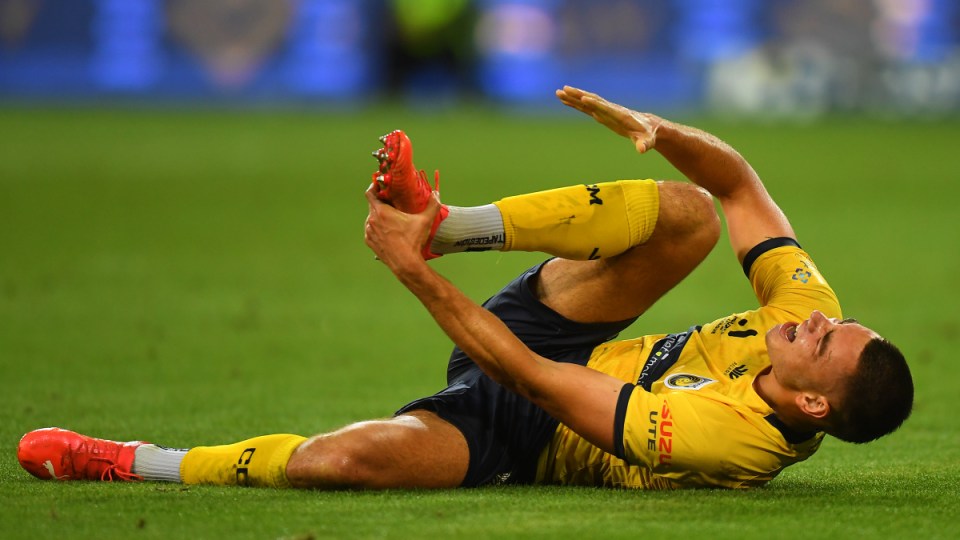 Lewis Miller was denied a penalty after being tackled in the Mariners' ALM loss to Melbourne City. Photo: AAP

Football Australia’s referee department has conceded Shaun Evans got it wrong in the two controversial decisions that cost the Central Coast Mariners in their A-League Men match against Melbourne City.

Refereeing and the VAR again came under the spotlight after the Mariners were denied what appeared to be a clear penalty in the 87th minute.

The Mariners were losing 3-2 when Mathew Leckie stepped on Lewis Miller’s foot.

That followed Melbourne City’s first-half equaliser coming via a contentious penalty call against Kye Rowles, who appeared to initially foul Marco Tilio outside the box, but was ruled to have done so in the area.

Football Australia's head of refereeing says officials have to be accountable for their decisions after two significant calls by referee Shaun Evans in an @isuzuUTE A-League clash on Tuesday night.

In a statement on Wednesday, FA said after a review of both decisions Evans had made the wrong decisions on both calls.

The department said City’s penalty shouldn’t have been awarded due to the secondary contact in the area being “negligible”.

It also ruled Leckie had fouled Miller and a penalty should have been awarded to the Mariners.

The statement did not disclose whether Evans would be stood down.

Nick Montgomery has expressed his bewilderment with two controversial VAR decisions that marred his side’s 3-2 loss to Melbourne City on Tuesday evening. https://t.co/jEeilPgdib

Mariners coach Nick Montgomery said the decisions had cost his team dearly and had set back the A-League Men competition.

“It’s tough for referees to make calls, the game is so quick,” Montgomery said.

“But when you have VAR and I’m looking at the screen and I can see (the Miller incident is) a penalty, and I can see that the first one is outside the box. Maybe they need to get together and really have a look at it.

“I think it’s sad for the game. I think the game has been ruined tonight. I think it’s a spectacle that Australian football didn’t need.

“There is a lot of positives here, it’s been a transition with everything that’s gone on, but nights like tonight really set the competition back and it’s sad for football.”

Miller, on the bench after Leckie’s challenge left him with a gash on his foot, could be seen saying “what is the point of VAR?” on Paramount+ coverage when Evans upheld the late decision.

Montgomery stressed VAR decisions needed to be made quickly to get the game moving again.

“Everyone watches the (English) Premier League. Why do we watch the Premier League? Because it’s the best league in the world,” he said.

“It’s fast, frenetic, it’s physical, it’s quick and that’s why everyone watches it.

“It’s always got to be about the product. People want to watch a game.”

“In the first half when I had the penalty, when it drags on and drags on you start questioning where you’re going to put it,” he told Paramount+.

“Look, he’s got a tough decision to make but you want them quicker.

“Because players, we ended up having a conversation with the Mariners boys for about three or four minutes which you don’t normally do and shouldn’t happen.

“So we want it quicker and also consistently.”