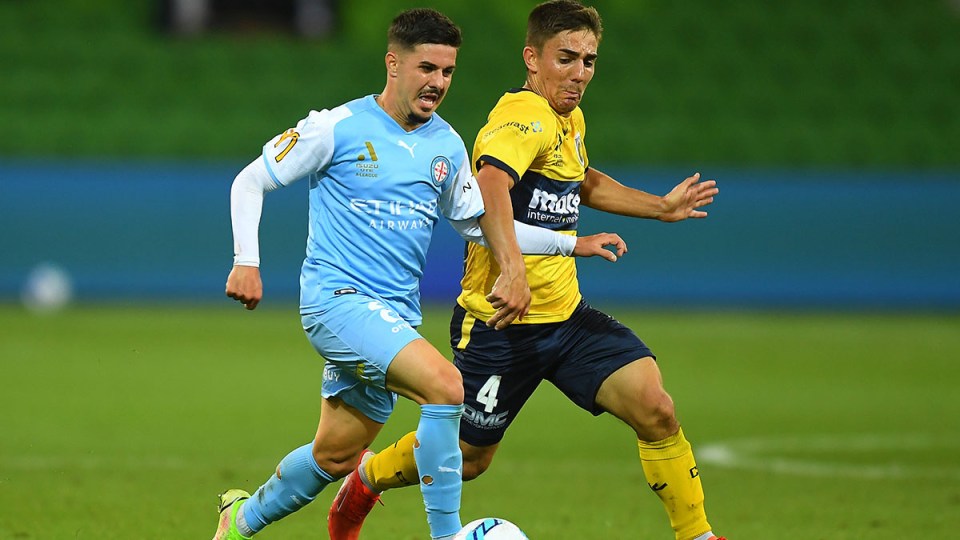 Two controversial refereeing decisions, accompanied by farcically long VAR reviews, have cost Central Coast dearly as the Mariners suffered a dramatic 3-2 loss to Melbourne City that sent the champions back to the top of the A-League Men table.

The Mariners were denied what appeared to be a clear penalty and a chance to equalise at the death when Mathew Leckie stepped on Lewis Miller’s foot, while Melbourne City’s first-half equaliser came courtesy of a contentious penalty call against Kye Rowles.

The Mariners had snatched the lead against the run of play in the 45th minute when Beni Nkololo coolly brought down a long ball, skipped past Nuno Reis and Curtis Good and ripped a strike inside the near post.

Three minutes later, referee Shaun Evans awarded City a penalty after Kye Rowles lunged in on a challenge on Marco Tilio on the edge of the box.

The challenge clearly started outside the box but Tilio went down inside the area and to the Mariners’ dismay, Evans considered it a spot kick rather than a free kick.

Drama before the break 🤯

Jamie Maclaren converts at the spot kick, scoring in three consecutive @isuzuUTE A-League matches.@MelbourneCity and @CCMariners come out for the second half at 1⃣-1⃣.

Evans received word from the VAR and reviewed his own decision for close to two minutes before upholding it, with Jamie Maclaren coolly dispatching his 10th goal of the season.

City took the lead in spectacular fashion in the 57th minute.

On the corner of the 18-yard box, Florin Berenguer worked the ball to Leckie then burst forward and coolly chested the Socceroo’s chipped pass down to himself to score.

The Mariners equalised eight minutes later when Jacob Farrell skidded a wonderful ball around the back of the City defence for skipper Oliver Bozanic to smash home at the far post.

City regained the lead on 74 minutes when Berenguer pounced on a Bozanic turnover, then combined with Maclaren and Leckie before Tilio stroked it home.

Marco Tilio gets his second of the @isuzuUTE A-League season and makes it 3⃣-2⃣ for @MelbourneCity.

Central Coast appeared certain to receive a penalty when Miller went down in the box in the 87th minute and had to come off after Leckie stepped on his foot.

Evans initially failed to whistle but went to a VAR review.

Miller was dismayed while Mariners coach Nick Montgomery received a yellow card and goalkeeping coach Jess Vanstratten was sent off.