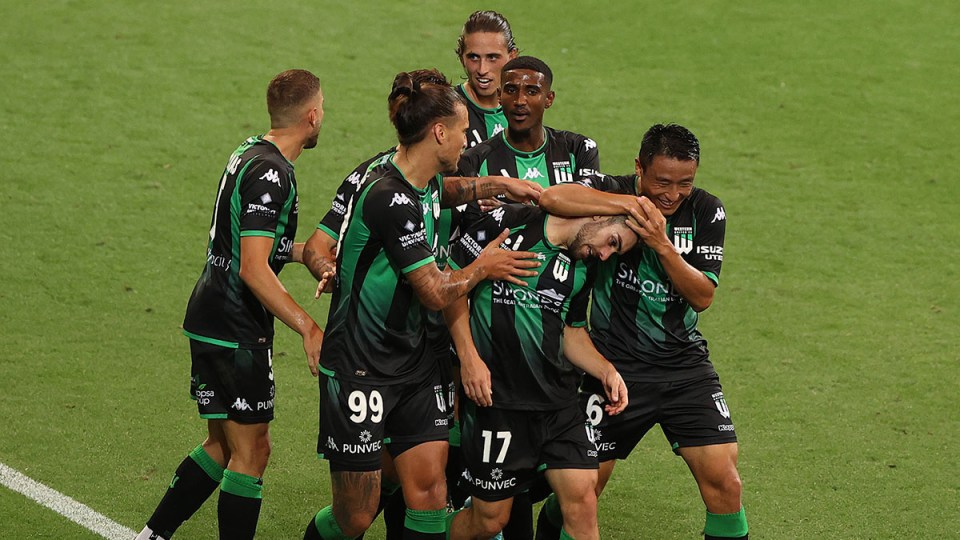 Ben Garuccio’s incredible scorpion-kick goal has stolen the show and gone viral as Western United beat Western Sydney 3-2 to leap back to the top of the A-League Men table.

Garuccio’s delightful 73rd-minute finish, when he met Aleksandar Prijovic’s outside-of-the-boot chip with an instinctive, diving scorpion kick into the bottom corner, followed an earlier 45th-minute strike for the full back, who previously hadn’t scored in the ALM since 2018.

It was reminiscent of Riley McGree’s instinctive scorpion goal in 2018 that was nominated for the Puskas Award.

“I did mean it. But could I do it again in 1000 goes? Probably not,” Garuccio told Paramount+.

“I did it at training a few weeks ago and I face-planted, so I suppose it’s just one of those. It’s probably one in 1000.

“I saw Aleks get the ball and I saw both the defenders go out and I thought ‘I’ll try make the run’ and to be fair, unbelievable ball.

“I threw my leg at it. I tried to watch it the best I could and I looked up and I was in the net.

“I couldn’t concentrate for the rest of the game. I was daydreaming, honestly.”

United striker Prijovic delivered both assists and also scored the opening goal in the 27th minute in a masterful performance up front.

Prijovic missed a 17th-minute header but made amends 10 minutes later when he burst past Jack Rodwell, latched onto Tomoki Imai’s long ball and coolly chipped Daniel Margush for the opener.

United doubled its lead on the stroke of half-time when Prijovic took a lovely touch from Alessandro Diamanti’s reflex ball out wide, turned and slipped through Garuccio, to smash home at the near post.

It's that man again!

Aleksandar Prijović opens the scoring in this fixture for the second time this @IsuzuUTE A-League season as @wufcofficial go ahead.

Hemed coolly dispatched the spot kick to get Western Sydney back into the match, but was denied by a brilliant Jamie Young save in the 56th minute, then spurned chances in the 58th and 62nd minutes.

But the midfielder ripped a wonderful skidding shot in the bottom corner five minutes later to make for a lively finish.