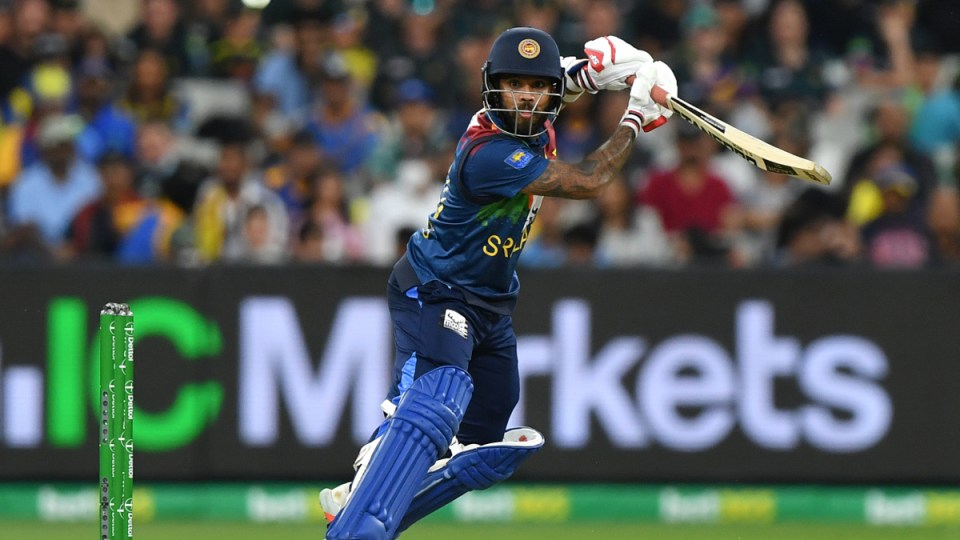 The MCG became a mini-Colombo as Sri Lanka pulled off an exciting consolation victory in the fifth and final match of their Twenty20 series against Australia.

Heading into Sunday night’s match down 4-0, Sri Lanka was lifted to a thrilling five-wicket win thanks to a sublime unbeaten 69 from star batter Kusal Mendis.

Despite some hiccups, including two diabolical run outs, Sri Lanka sneaked past Australia’s total of 6-154 with just one ball to spare.

It was opener Mendis’ third-best T20I score and he received solid support from captain Dasun Shanaka (35) in a 83-run partnership.

Shanaka made the result a certainty when he hooked quick Kane Richardson for a giant six with three balls to go, levelling the scores.

He was bowled the next ball but Chamika Karunaratne was able to bring up the winning run after hitting Daniel Sams, who replaced an injured Richardson, away to square leg.

It means the Australian men’s team fell just short of completing an undefeated international summer, with this loss going alongside the drawn Ashes Test at the SCG as a blemish.

The tourists enjoyed the bulk of the support from the crowd, with the Sri Lankan community in Melbourne turning out in droves.

Like Friday night’s contest, Sri Lankan fans packed out the Ponsford Stand at the city end of the ground to create an electric atmosphere amid a crowd of just 17,566.

Matthew Wade top scored for Australia, smashing an unbeaten 43 from 27 balls to boost the home side after a sluggish start.

After winning the toss and electing to bat, Aaron Finch’s men struggled to get going as the tourists held the upper hand for most of the innings.

Finch’s move back to the top of the order after two games at No.3 did nothing to shake him out of his form slump, making just eight.

His opening partner, Ben McDermott, also struggled again, surviving a dropped catch and another near-miss before departing for three off 13 deliveries.

Australia scored just 2-22 from the first powerplay and were crawling at 3-58 after 10 overs.

Josh Inglis and Glenn Maxwell (29) looked the pair most likely, after putting on a match-winning stand in Friday night’s six-wicket victory.

But Inglis (23) had to go after snicko revealed a noise when the ball went past his glove before crashing into his helmet.

Despite the disappointing end to his innings, Inglis has enjoyed a brilliant debut international series to finish with 155 runs at an average of 38.75.

The 26-year-old will give selectors plenty to ponder ahead of October’s T20 World Cup defence.

Ashton Agar was shuffled back to No.8 after two games as an opener, with the all-rounder in terrific form with the ball and Australia keen to find a spot for him in the side.

Agar bowled 12 overs during the series and did not concede a boundary.

National Sorry Day is a day to commemorate those taken. But ‘sorry’ is not enough – we need action
Hannah Green creates golf history by winning mixed-gender tournament
Today's Stories