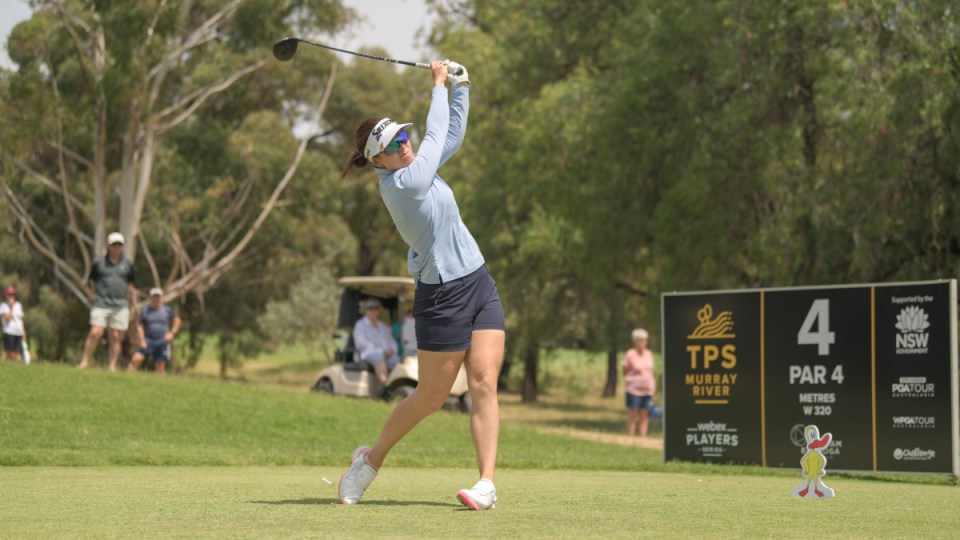 Class has prevailed as Hannah Green scored a dominant four-shot victory in the $200,000 TPS Murray River, becoming the first woman to win a 72-hole mixed-gender tournament on any of the world’s leading golf tours.

Major championship winner Green showed she was ready for another big year on the LPGA Tour as she overcame gusty conditions and a clutch of male rivals to shoot a closing a five-under-par 66 and finish at 20 under at Cobram Barooga Golf Club on Sunday.

The 25-year-old world No.30 started the final round in a four-way tie for the lead with Andrew Evans, Matthew Millar and Blake Collyer but separated herself when she chipped in for eagle on the par-5 10th hole to go three clear and never looked back.

Young Western Australia amateur Hayden Hopewell came from well back with eight birdies in a round of 65 to tie for second with New South Welshman Evans (70).

History on the Murray. @hannahgreengolf has created a world-first slice of history with a commanding four-stroke victory at the #TPSMurrayRiver at Cobram Barooga Golf Club. #WebexPlayersSeries | @WPGATour pic.twitter.com/LTUueT8ymY

The tournament was part of the innovative Webex Players Series which was introduced at the start of 2021 and has men and women competing in the same field – from adjusted tees – for the same prize purse and one trophy as part of the PGA Tour of Australasia and WPGA Tour schedules.

“It feels amazing,” said Green of her slice of golf history.

“I wasn’t going to play here (after winning last week’s Vic Open). I was going to go home to Perth but I think things happen for a reason.

“Hopefully I can continue this momentum for the rest of my season.

Green was hopeful that Western Australia’s long-awaited moves toward opening its borders will make life a bit easier in 2022 as she continues her international career, allowing her to return home at times.

Canberra veteran Millar battled home with a 72 to tie for sixth while young Victorian Collyer had a bigger struggle as he carded a 75 and tied for 13th.

The best previous finish by a woman in a Webex Players Series event had been Su Oh’s tie for third at TPS Victoria last year.