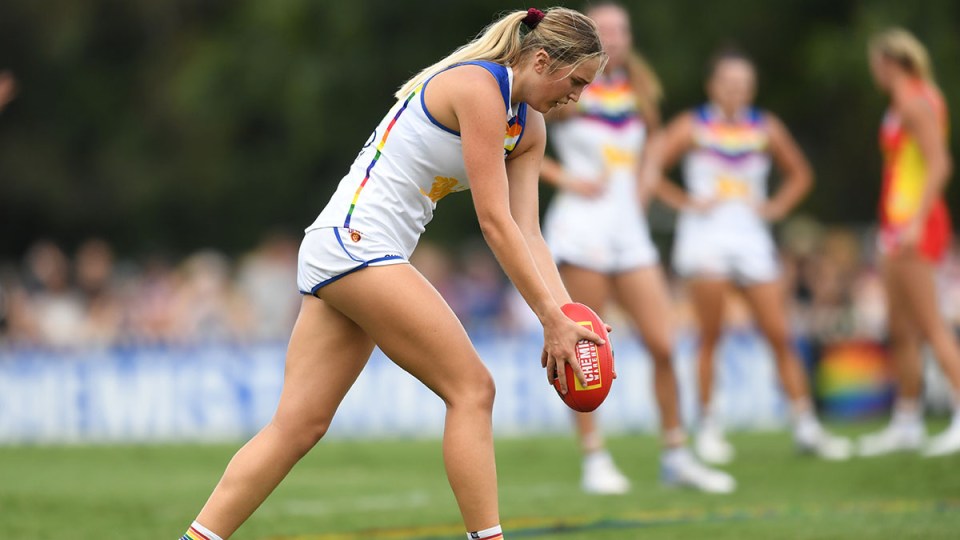 Ruthless AFLW premiers Brisbane has put Queensland rivals Gold Coast firmly back in its box, smashing the Suns by 69 points at Metricon Stadium.

The Suns came into Thursday’s rescheduled QClash on the back of three wins in their past four matches but had no answer to the Lions’ experience and aggression, Brisbane easing to a 12.13 (85) to 2.4 (16) victory.

It’s Brisbane’s highest score, eclipsing its previous best tally of 65 and the victory margin is also the biggest in Lions’ history.

Brisbane’s fifth straight win means it leaps to third on the ladder, with its opening-round loss to Adelaide long since forgotten.

Former Sun Taylor Smith kicked three goals in the rout as the Lions claimed a fifth-straight win to move into fourth on the ladder.

The 21-year-old was awarded the QClash medal as best on ground for her display, which also included 17 disposals and four tackles.

Gold Coast didn’t score a goal until five minutes into the final quarter with Tori Groves-Little’s finish avoiding the ignominy of repeating the 0.2 (2) final score in last year’s QClash.

Experienced forward Sarah Perkins added a second for the hosts with less than five minutes to play with a nice set-shot finish, but the Lions had the final say with the last two goals of the contest.

Brisbane’s dominance began from the outset, with Isabel Dawes, Smith and Orla O’Dwyer kicking goals to open a 19-point lead at the first break.

That dominance continued across the next two quarters, with Brisbane recording 22 inside-50 entries to just two for the Suns as the Lions roared away.

The Lions will look to extend their winning streak when they face Melbourne in a mouthwatering contest at Metricon Stadium on Monday.

Gold Coast’s next match is against the Western Bulldogs on Tuesday.