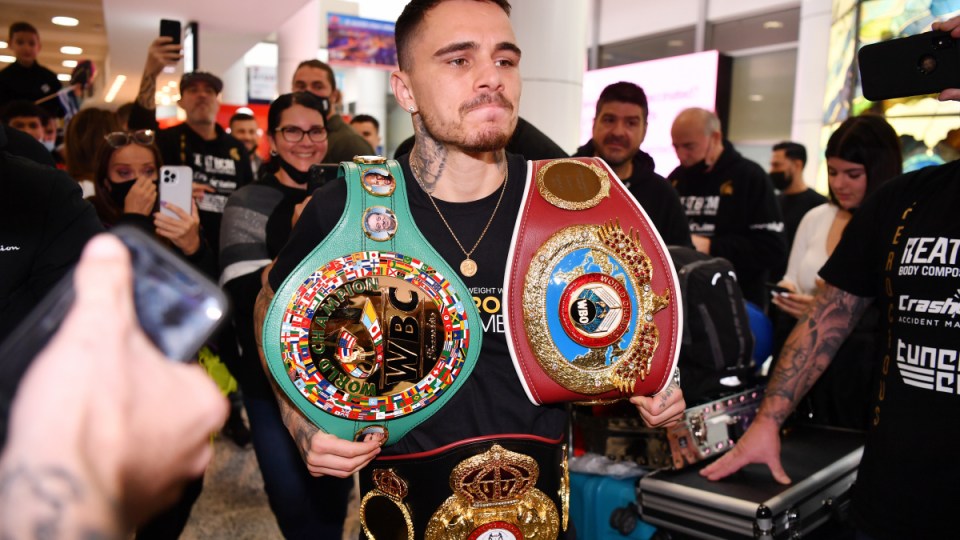 George Kambosos will put his three world title boxing belts on the line at Marvel Stadium on June 5. Photo: AAP

But the Sydneysider who stunned the boxing world with his shock defeat of Teafimo Lopez in December says the stadium super fight won’t necessarily be against Ukrainian Vasiliy Lomachenko.

Although admitting Lomachenko had edged into favouritism, Kambosos said American Devin Haney remained in the hunt.

“They are both still in the running,” Kambosos said on Wednesday.

Fine Tuned In The Art Of War With The Greatest Southpaw Of Them All ⚔️🥊 #legendary pic.twitter.com/lPF2LR4277

“I think Lomachenko has started to creep close to the finish line and that excites me big time because Lomachenko is a hell of a fighter, a guy who’s won two Olympic gold medals, multiple world titles.

“But Devin Haney excites me a lot too because he does have that small other little piece that he loves.

“He never really earned it in the ring but he does love his piece and I’d love to splatter his face across the ring and take that off him as well.

“But they’re both still in the running and it’s going to be interesting to see who crosses the finish line and has to step into the lion’s den of “Ferocious” Kambosos, the Emperor.”

Lomachenko was widely considered the premier pound-for-pound boxer on the planet before Lopez stripped him of the WBA, IBF and WBO belts that Kambosos now holds in October, 2020.

Haney has the WBC belt.

“People are going to say, ‘Wow, Kambosos is crazy. He’s taking a massive risk to fight one of these guys in his first defence’.

“But you’ve got to be a little bit crazy in this game. They said I was crazy when I said I was going to be better than Lopez in every single aspect and I proved them wrong.

“I’ll prove them wrong again. I don’t plan on handing these belts over ever. These belts are mine.

“I know what I had to go through to earn them the hard way and I did what no Australian has ever done before and, again, I’m ready to create more history.

“This is a legacy fight for me. This is my destiny.”

Kambosos took in the Australian Open tennis, watching Greek ace Stefanos Tsitsipas at Rod Laver Arena, before deciding on Marvel Stadium, which has an official capacity of 52,000 but could conceivably seat more for a boxing match.

“It’s going to be a hell of an environment,” he said.

“I’m a Sydney boy and I can’t wait to fight in Sydney but this one they’re just going to have to fly down for it, which I know the whole army of Sydney is going to be coming down.

“And Melbourne is an amazing city, great stadiums and just has that atmosphere and that’s what we’re excited about after seeing how the tennis was and how the fans interacted.

“This is going to be huge. A mega fight is only fitting for it. The Emperor comes back home to fight in front of all his people in the biggest fight ever in Australian boxing.”