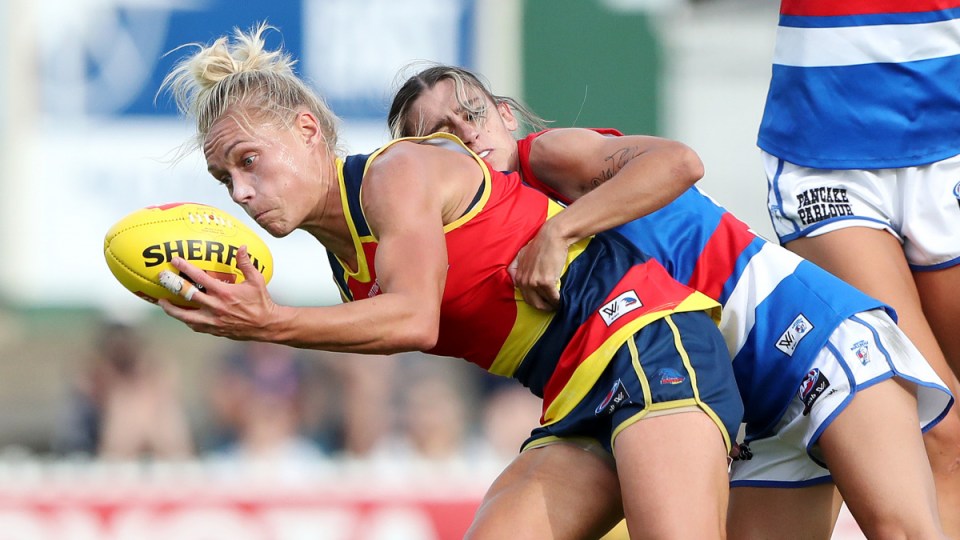 Western Bulldogs withstood a furious second-half revival from Adelaide to upset the previously unbeaten Crows by one point and break their road drought in a massive AFLW boilover at Norwood Oval on Sunday.

The Bulldogs, who won 8.1 (49) to 7.6 (48) and only scored their first win of the season last week, never trailed and won away for the first time since beating the Crows at the same venue in round one of 2019.

Sparked by midfielders Ellie Blackburn and Kirsty Lamb, the visitors scored the first 19 points and led by as much as 24 in the second quarter, as they stunned the Crows with their run, aggression and tenacity.

Adelaide dominated territory in the second half, but the Bulldogs hung on despite playing more than half the game two players down.

Debutante Aurora Smith was forced off the ground early in the encounter with a knee injury, having logged a tackle but no disposals.

Brooke Lochland was also ruled out of the game before half-time after suffering a concussion following an accidental clash with teammate Bonnie Toogood.

Adelaide trailed by 15 early in the final quarter, but goals to Ashleigh Woodland and Stevie-Lee Thompson cut the deficit to three points.

A couple more Crows behinds set up an incredible finish, with Erin Phillips falling just short from a set shot and Caitlin Gould having a close-range kick smothered, as the Bulldogs desperately defended a couple of stoppages from about 10 metres out in the final minute.

That's a wrap of Round Six, and what a round it was 🤯

“I just can’t believe in that last minute or so or so we didn’t let it go in,” Blackburn told Fox Footy.

“We started off really well and they are a really good side, so we knew they were going to come we just had to hold on.”

By half-time, Adelaide had already conceded more points than in the entirety of any of its five previous games this season.

Ebony Marinoff accumulated 26 disposals, Anne Hatchard 23 and Phillips 20, including 16 in the second half.

Lisa Whiteley and Woodland both kicked two goals, with the latter taking her season tally to 12, the highest in the competition.