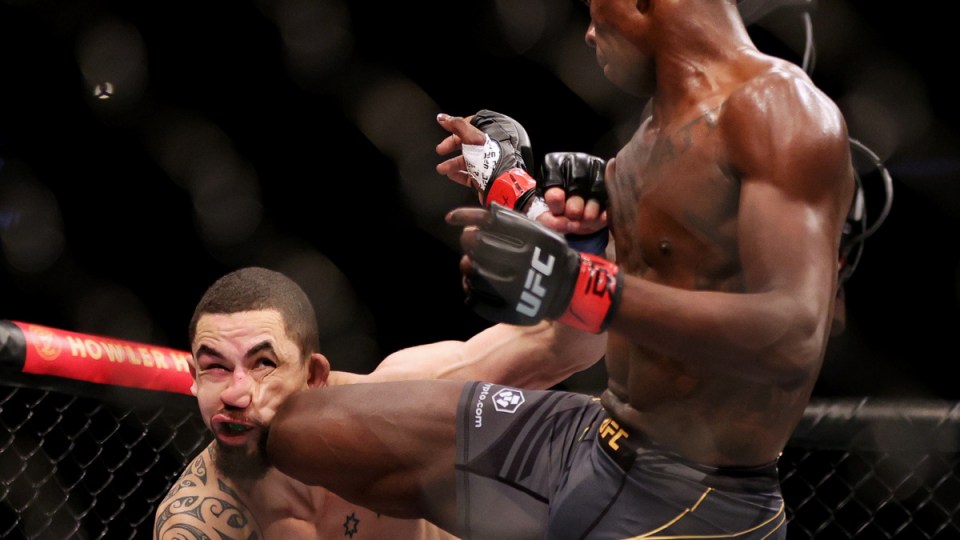 Robert Whittaker has been left scratching his head after losing a tight, unanimous points decision in a UFC middleweight title rematch three years in the making to Israel Adesanya.

The Sydney fighter lost his title to the Nigerian-born New Zealand star in 2019, winning three times since to earn the rematch in Houston’s UFC 217 main event.

And he showed he’d learnt plenty after that second-round knockout in Melbourne, pushing the heavy favourite in a unanimous decision (48-47, 48-47, 49-46) he thought should have gone the other way.

Whittaker (24-6) took the second round according to one judge, while the two other judges both agreed the Australian had won the final two rounds.

“Business as usual.”@StyleBender stayed completely locked in against Robert Whittaker and came away with yet another defense of his middleweight title.

The champion had more significant blows, but four takedowns helped Whittaker’s cause as he was left to lament what could have been in front of 16,000 fans at the Toyota Centre.

“I’m happy that I fought my heart out and left it here (but) I’m gutted. I thought I did enough,” said Whittaker, who thought he’d won all but the first of the five five-minute rounds.

“He’s the champ. He beat me for the second time now and that’s that. We’re the two best in the world. We know this.”

Adesanya (22-1) was pushed in his fourth title defence but remains unbeaten at the middleweight class.

He is eyeing another fight in June, likely against No.3 Jared Cannonier after he scored a brutal second-round submission win earlier in the night.

“I knew he was going to bring everything; he had nothing to lose. Like I said, I’m the champ, you want it, come get it,” Adesanya said.

“He had been working on his boxing … kudos to his boxing team and coach.

“I knew he was going to try and copy Jan’s (Blachowicz, who beat him at light heavyweight) homework, but I’m the big dog in this yard so he couldn’t take me down at all.”

Under the pump against the No.3-ranked fighter, Tuivasa connected with a right elbow in the second round to make it five straight knockout wins and put him firmly in the frame for a title fight.

Earlier, Scottish-born, Gold Coast-raised Casey O’Neill won a split decision over retiring crowd favourite Roxanne Modafferi and was booed as she was interviewed in the octagon.

Judges unanimously gave the final round to Modafferi despite O’Neill landing a UFC flyweight record 229 significant strikes and earning the largest significant strike differential (109) in that women’s weight category.

The victory improved her record to 9-0 but brought jeers from the crowd hoping for a winning farewell from the American.

And Penrith NRL wrestling coach Jacob Malkoun, a training partner of Whittaker’s, won his second-straight fight in a comeback victory over US prospect AJ Dobson.

Malkoun dropped the first round but managed to ground his opponent and keep him there to control the final two rounds.