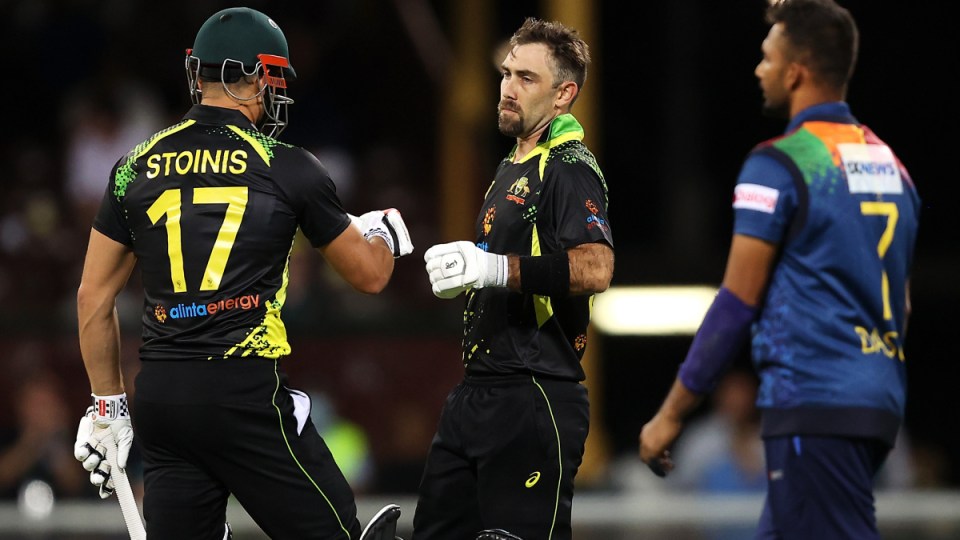 Marcus Stoinis and Glenn Maxwell seal victory in the super over at the SCG on Sunday night. Photo: Getty

A stunning Josh Hazlewood display in the super over has helped Australia to consecutive T20 international wins over Sri Lanka at the SCG.

Hazlewood backed up his figures of 3-22 by conceding just five runs in the super over to quell any hope of a Sri Lanka win on Sunday night.

The biggest concern for Australia out of Sunday’s game, though, was a possible injury for batsman Steve Smith.

Smith dived to take a catch on the boundary rope before landing awkwardly and appearing to sustain a concussion in the final regulation over.

An epic at the SCG!

How's everyone's heart-rate? Our Aussies win in a Super Over after Sri Lanka finished really strong.

We take a 2-0 lead into the third match in Canberra on Tuesday #AUSvSL pic.twitter.com/as9DydrJlT

In front of a crowd of 6305, Sri Lanka needed 12 off three balls to chase down the total of 165 when Maheesh Theekshana hit Marcus Stoinis for six off the first delivery.

Smith went to flick the ball back into the field of play but he landed directly on his temple.

Smith went off for treatment before Dushmantha Chameera tied the scores by hitting the last ball for four.

Josh Inglis (48) proved the best of Australia’s batters, and Sri Lanka were sluggish in their response before it began to get on top through Pathum Nissanka (73) and captain Dasun Shanaka late in its innings.

Nissanka survived until the last over with his side needing 19 off the last six balls.

All hope seemed lost when he was picked off by Pat Cummins but Theekshana had different ideas.

Smith was unable to stop him and Chameera sent the game to a super over.

Under enormous pressure, Dushmantha Chameera pummels it down the ground to level things up! #AUSvSL pic.twitter.com/zLBh0r8A3W

The two sides are next in action when they travel to Canberra on Tuesday.