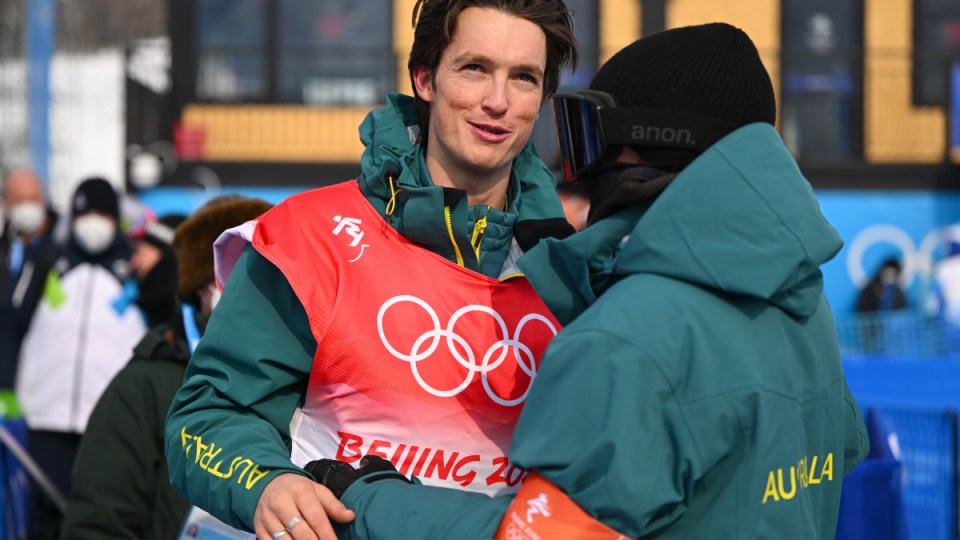 Scotty James of Australia is all smiles with his brother Sean after Olympic halfpipe qualifiying. Photo: AAP

Snowboard superstar Scotty James will be chasing Japan gun Ayumu Hirano in the men’s halfpipe medal round after the Australian qualified for the Olympic final in second spot.

James’s top score came in his second run, when he scored 91.25 and was only bested by two-time silver medallist Hirano, who was rewarded with 93.25 for his second outing on Wednesday.

Australian teen Valentino Guseli rebounded from a disappointing first run when he failed to exit an early jump cleanly to qualify in fifth spot, scoring 85.75 with his second effort.

He sits one spot behind three-time Olympic champion American Shaun White, who also blew his first run but nailed his second with an 86.25.

White will retire after Beijing, his fifth Olympics.

They will go for Gold in the Men's Snowboard Halfpipe Final 🏂#Beijing2022 | #7Olympics pic.twitter.com/4Rx8aNYfBF

James kept it fairly simple with his opening run, with no sign of the snowboarding’s most difficult trick, the triple cork, but signed off with two double cork 1260s to score 88.25 to take top spot.

In the second run the four-time Olympian finished with a frontside 1440 tail-grab and yelled with delight, punching the air.

The Australian, who is looking to improve on his bronze medal four years ago in PyeongChang, said he was happy with how the day played out.

He wasn’t fazed by being in second spot, saying he was targeting top three.

"It's probably my game face… is being able to grin and smile at the whole atmosphere of the Olympic Games."

“I’m really happy with the result. We stuck to our plan,” 27-year-old James said.

“The plan was to put it together on the first run and feel good and then just build on it and work on anything that I felt needed a little bit more perfection and I was able to do that so I’m super happy.”

Earlier, Emily Arthur missed the cut-off to advance to the final of the women’s halfpipe competition.

The 22-year-old scored 62.50 to sit in 12th place after the first round, with 12 riders advancing to Thursday’s finals and medal round.

With the best score of two rounds counting, the Sydney athlete started her second run in good shape but then fell mid-pipe and only managed to score 19.75 to drop two places to 14th and out of the finals-bound group.

It’s a disappointing result for Arthur after she finished 11th four years ago in PyeongChang.

The top qualifier was defending Olympic champion American Chloe Kim, who opened with a massive score of 87.75 but also fell on her second.

Kim has won every single halfpipe event in which she has taken part since the 2018 Olympics.