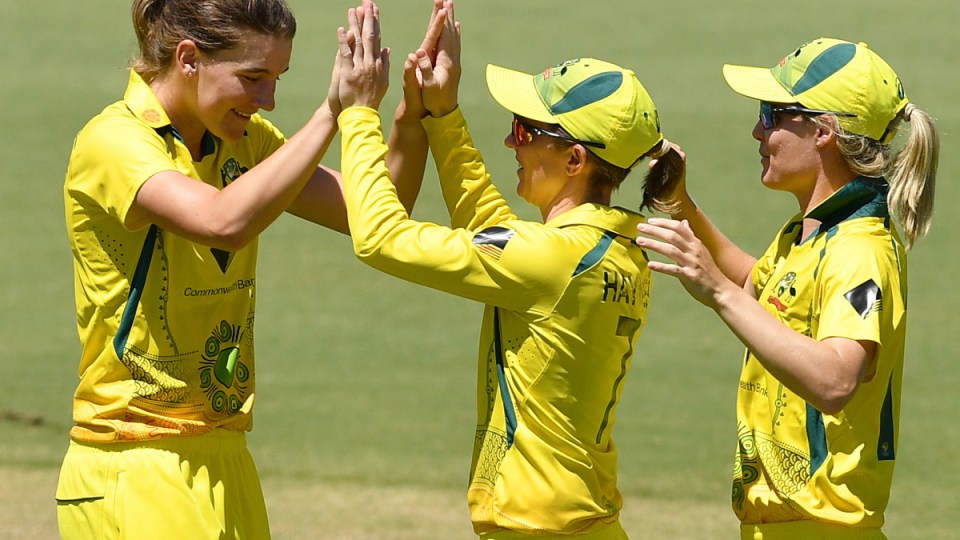 Australia has crushed England by eight wickets in the third and final ODI to complete an undefeated women’s Ashes campaign.

Even with the urn secured last week, Australia has not relented in the multi-format series as it eyes redemption at next month’s ODI World Cup in New Zealand.

Openers Alyssa Healy (42) and Rachael Haynes (31) made batting look easy at the Junction Oval in Melbourne, racing to 0-74 in pursuit of England’s 163.

The hosts then had a mini-collapse, losing 2-0, before captain Meg Lanning (57 not out) and superstar all-rounder Ellyse Perry (31 not out) steered Australia home with 82 balls to spare.

The perfect way to end an incredible #Ashes series on home soil! Next stop: New Zealand for the World Cup ✈️

Lanning and Perry now average 170 as a batting pair in ODI chases, winning 12 of those 13 games.

It is the first time since 2013-14 Australia has ended an Ashes battle with a victory in the last game of the series.

Australia won the first of the three Twenty20s, with the two other matches in Adelaide washed out, drew a thrilling Test in Canberra, before clean-sweeping the ODIs.

England will leave Australia after failing to record a win all summer between their men’s and women’s teams.

Heather Knight’s team has not held the women’s Ashes since Australia regained them in 2015.

After electing to bat first on Tuesday, England seemed more intent on surviving than setting Australia a challenging target.

The batting was akin to Test cricket rather than the 50-over format as the tourists were dismissed with three balls remaining in their innings.

When Beaumont attempted to lift the lagging run-rate she lost her wicket to emerging Australian leg-spinner Alana King, triggering a collapse of 8-56.

The tourists made three changes to their XI, including giving a debut to opening batter Emma Lamb, who was bowled for a second-ball duck to Perry.

All-rounder Tahlia McGrath continued her breakout summer to be named player of the series, backing up her scintillating efforts against India late last year.

What a season she’s having!

Huge congratulations to Tahlia McGrath – the recipient of the Peden-Archdale Medal for Player of the #Ashes series! @CommBank pic.twitter.com/lRbn9EzMHj

McGrath contributed with bat and ball across all three formats,  highlighted by a stunning unbeaten 91 and 3-26 in the first T20.

“Once we retained the Ashes, it was about winning it outright. Then it was about not letting England in at all,” McGrath said.

“It was really important to finish off the job, so it’s great momentum leading into the World Cup.”

Australia will now turn its attention to reclaiming the World Cup crown, which it dropped in surprising fashion during the last edition in 2017.

Lanning’s team has won 29 of its past 30 ODIs, including a record 26-match winning streak.