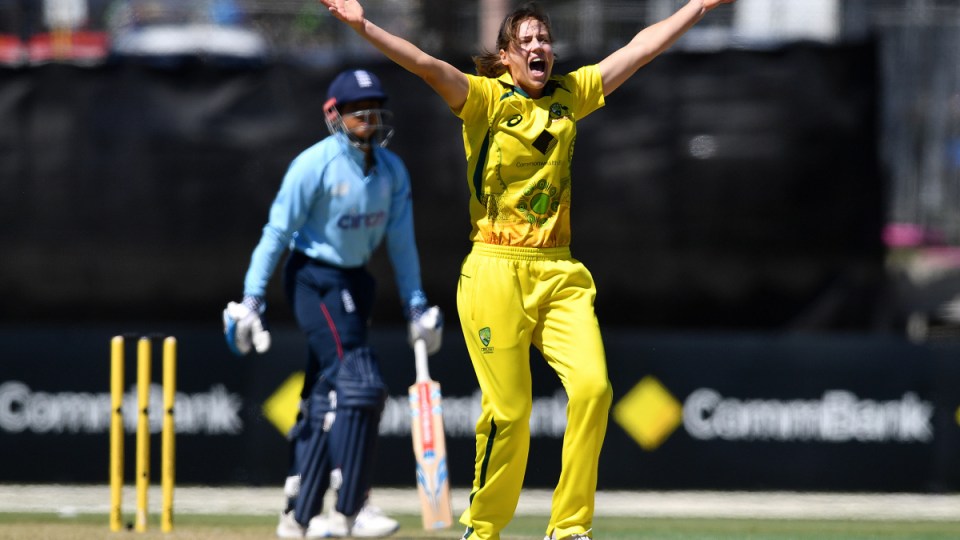 Ellyse Perry has recaptured her best form with a commanding all-round display to power Australia to a five-wicket ODI win against England.

The 31-year-old did it with bat and ball as Australia kept its undefeated record in this year’s multi-format Ashes alive on Sunday, winning with 90 balls to spare.

Perry ripped through England’s top order by taking 3-12 after Australia captain Meg Lanning won the toss and opted to field first at the Junction Oval in Melbourne.

The tourists were on the back foot immediately as wicketkeeper Alyssa Healy claimed a screamer of a catch off Perry’s bowling to dismiss Tammy Beaumont for the opening wicket.

If you need us, we'll be watching this drive from Ellyse Perry on repeat 🔁#Ashes pic.twitter.com/y3U46lX1zc

It did not get much better for England as it was all out for a paltry total of 129 in the 46th over.

After leading the way with the ball, Perry hit an accomplished 40 – her best ODI score in almost a year – to top score for Australia.

Perry was run out going for a quick single 30 runs short of the target, before Ashleigh Gardner (31 not out) and Annabel Sutherland completed the victory at the end of the 35th over.

England is yet to claim a win over Australia all summer between their men’s and women’s teams, losing 14 matches and drawing four.

“The most pleasing part is we’ve been able to absorb pressure across the series,” Perry said.

“A lot of that is down to the outstanding leadership in the side, and just the calmness throughout the group.

“Girls just take their opportunities when it’s given to them, whether they’ve been in the side for two minutes or 20 years.”

Even without quick Darcie Brown, who skittled England with figures of 4-34 in the first ODI three days ago, Australia’s bowlers always had the upper hand.

Mooney scored a match-winning 73 in Thursday’s first ODI, which secured the Ashes for Australia, but left the field early after experiencing quadricep tightness.

Leg-spinner Alana King picked up her maiden ODI wicket, adding to the debut scalps she claimed in the Twenty20 and Test arenas in the past three weeks.

Given! Meg throws Tahlia McGrath for the first time today and she's delivered the breakthrough immediately!

Already on the ropes at 7-107, England was further brought undone when Tahlia McGrath took 2-1 in her first over.

McGrath claimed the last three wickets of the innings to grab 3-4 from 3.2 overs.

Tailender Sophie Ecclestone was England’s top scorer with a gritty unbeaten 32, while captain Heather Knight battled hard for 18 before losing her wicket to spinner Jess Jonassen.

Australia has been near untouchable in the 50-over format for the past three years, winning a world record 26 straight matches before India finally ended that run in September.

The series will wrap up in Melbourne on Tuesday with the third and final ODI.

Australia will be warm favourites in the ODI World Cup in New Zealand, starting on March 4.