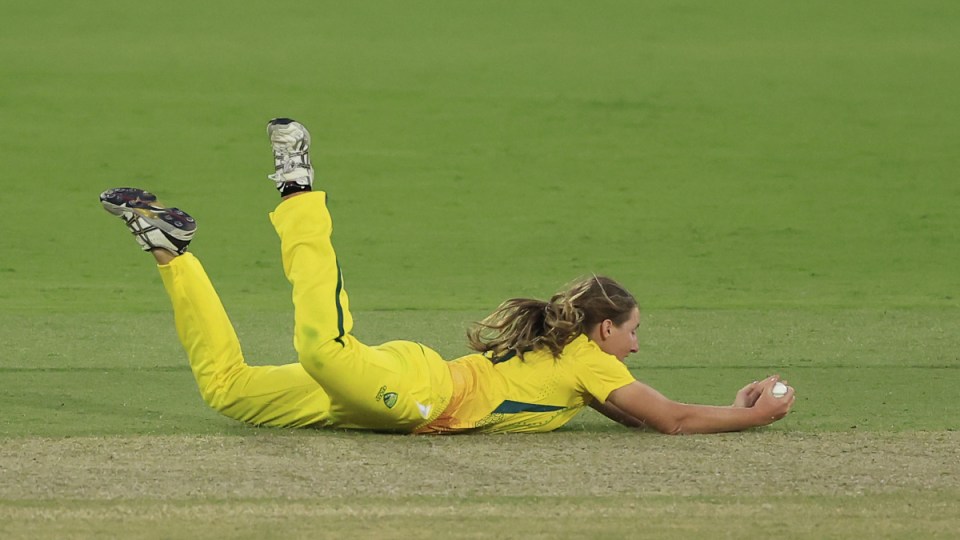 Darcie Brown takes a caught and bowled off Nat Sciver in Canberra on Thursday. Photo: Getty

Australia has retained the Women’s Ashes, producing a stifling display with the ball to claim a 27-run win at Manuka Oval.

The victory on Thursday night sees Australia take an unassailable 8-4 points lead, the third time it has defended the trophy since claiming it back in 2015.

A gutsy 73 from Beth Mooney proved vital, but 4-34 from Darcie Brown and 2-34 from Tahlia McGrath helped the hosts defend their middling total of 9-205.

England was quickly up against it as Brown took wickets in consecutive balls to leave the tourists at 2-10.

She found genuine swing to have Tammy Beaumont caught at first slip, while ever-dangerous captain Heather Knight followed her back to the sheds after falling plumb lbw.

Nat Scivers and Lauren Winfield-Hill set about the repair job but the latter pulled Megan Schutt straight to Ashleigh Gardiner the deep to leave England 3-39 in the 11th over.

And in a pivotal moment, Amy Jones was caught spooning a Tahlia McGrath full-toss to deep mid-wicket, with the third umpire controversially judging the delivery was not a waist-high no-ball.

Random thought. In matches where DRS is in place, why not use ball-tracking to check full toss no balls? Otherwise this just feels like an arbitrary 50-50 call. Isn't Hawkeye meant to project ball trajectory anyway? #Ashes pic.twitter.com/sLgwPHd1Fe

It was 5-83 shortly after as McGrath struck again to get Sophia Dunkley lbw, but Sciver and Danni Wyatt pressed on and passed the 100-run mark in the 26th over.

But Brown’s broke the camel’s back with an acrobatic caught-and-bowled to get Sciver’s vital wicket, gone after a classy 45 with England 6-103 and still needing another 103 for victory.

A perfect leg-cutter from Schutt bowled Wyatt for 20 and Brown made it four with Sophie Ecclestone lbw, although Katherine Brunt (32 not out) and Kate Cross (17) did add late runs before England was all out for 178.

Earlier, having been reeling at both 4-67 and 7-152, Mooney steered Australia to a defendable total after the tidy bowling saw star batters Meg Lanning (28) and Alyssa Healy (27) fail to push on.

An absolute jaffa from Kate Cross, who finished with three wickets, that jagged back off the seam and knocked over Lanning was the ball of the afternoon, coming after the Australia captain brought up 4000 career one-day international runs.

"That has seriously moved!"

Mooney’s sensational knock included eight fours and a six, and saw her stick fat as wickets tumbled around her.

She was taken from the field with quad tightness during the run chase and did not return.

The series continues with one-dayers in Melbourne on Sunday and Tuesday.