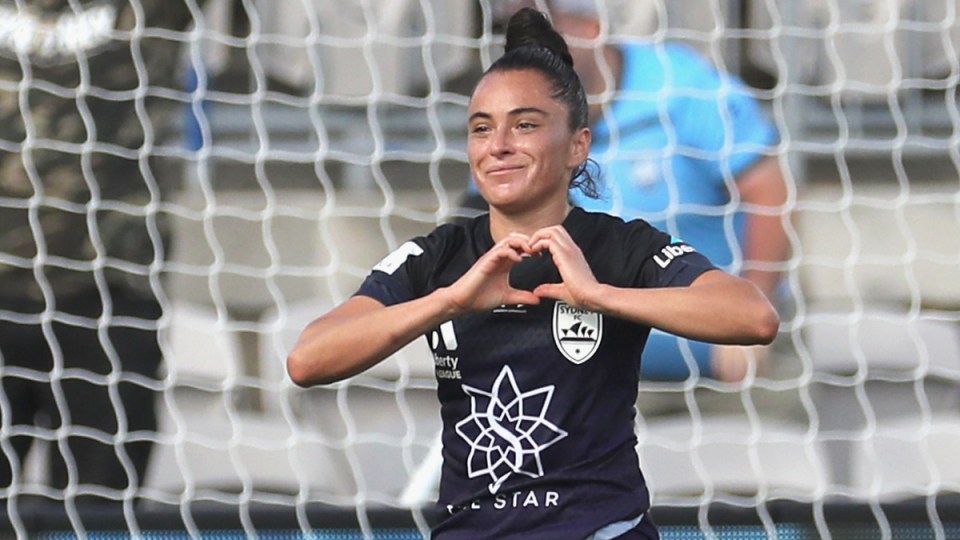 Sydney FC’s immaculate A-League Women’s season has cruised past another test, seeing off Brisbane Roar in a 2-0 win at Leichhardt Oval.

A goal and an assist earned Charlize Rule player of the match honours and three points for her side in a commanding display on Wednesday that rarely saw the competition leaders on the back foot.

The clean sheet saw Sydney earn the ALW’s record for longest time without conceding a goal, breaking the previous mark of 12 hours and 12 minutes in moving to 25 of a possible 27 points this season.

Roar was without skipper Ayesha Norrie, who suffered an ankle knock in her side’s previous game against Melbourne City, and it didn’t take the home side long to assert itself.

It went ahead inside five minutes after Maria Rojas volleyed home Rule’s chipped cross after finding an acre of space inside the Roar box.

Before the Sky Blues could run away with the game, Brisbane found a half-chance for Larissa Crummer but her left foot couldn’t guide a shot goalwards, while a strike from Mariel Hecher on 17 minutes should have done more to threaten Sydney keeper Jada Whyman.

Five minutes later Roar’s Shea Connors should have levelled things up after finding herself through on goal, but her shot targeting the near post couldn’t beat Whyman’s outstretched right paw.

And as half-time approached Rojas easily could have doubled up, spooning a close-range shot wide from a tight angle after a Mackenzie Hawkesby shot fell into her path.

But Sydney would find its second on 48 minutes through Rule, who nodded home from close range after a scramble from a corner.

We have now not conceded a goal for 732 minutes. An A-League Women's record. 🤯#SydneyIsSkyBlue

Things got even worse for the visitors shortly before the hour, with Annabel Haffenden sent off after dragging down Rojas as she looked to shoot from just outside the box.

The Sky Blues wouldn’t make the player advantage count though with a stinging hit from Hawkesby in the 80th minute that struck the post their best chance of the contest’s dying minutes.