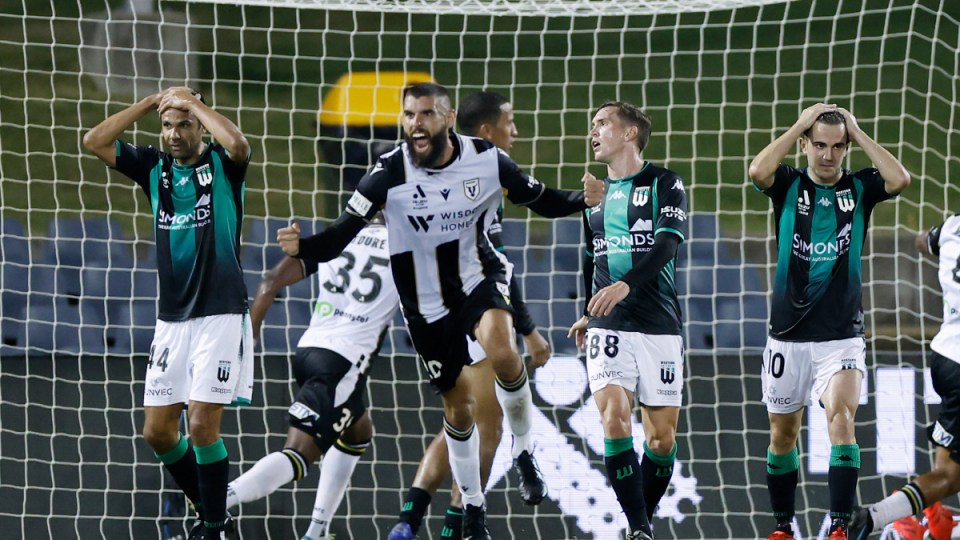 Macarthur FC came from two down to draw at home to Western United at Campbelltown Stadium. Photo: AAP

Western United has moved to the top of the A-League Men competition despite conceding two late goals, as Macarthur FC rallied to force a 2-2 draw on Monday night.

Trailing 2-0 at Campbelltown Stadium, Macarthur pulled one back through a fine curling strike from substitute Lachie Rose in the 77th minute.

The Bulls secured a deserved point when a Tomislav Uskok header from a 88th-minute corner was deflected into the net by United defender Leo Lacroix.

The visitors twice went close to snatching a winner in added time but had to settle for a point that moved them one clear of Melbourne Victory, which has a game in hand.

Rate Lachie Rose's goal out of 10.

The winner on the night was guaranteed first spot and United was initially more clinical against a Macarthur side that hadn’t played since Boxing Day.

United’s five previous victories had all been by a 1-0 margin, and for a long time it looked like that score would be repeated.

Coach John Aloisi made six changes to his side with star Italian import Alessandro Diamanti one of the rested players.

His youngsters stepped up with Nicolas Milanovic scoring his first ALM goal in his first start when he swept in a Ben Garuccio cross in the 16th minute to give the visitors the lead.

A goal that currently has @wufcofficial three points clear at the top of the @IsuzuUTE A-League ladder.

United goalkeeper Jamie Young made half a dozen first-half saves to preserve their lead going into the break.

The visitors doubled their advantage in the 74th minute when Aleksandar Prijovic swept in a fine first-time pass from fellow substitute Lachie Wales.

The half-time introduction of Ulises Davila added more danger and thrust to Macarthur, as he went close on a number of occasions.

Former Socceroos striker Apostolos Giannou had a couple of good first-half chances on his Bulls debut, but Young blocked one shot with his legs and then saved a close-range header.

“It was very humid here. It was a tough night for the boys physically but they worked well. They worked hard,” Aloisi said.

“There’s a lot of heads that are down in there, but I’m proud of them.

“We felt we were going to win the game, but in football things can turn very quickly and these things happen.”

The point moved Macarthur up a place to fourth, two points behind Western with three games in hand.

Adelaide is third. Defending champion Melbourne City is in fifth, one point behind the Bulls.

Bulls coach Ante Milcic was pleased with the way his side reacted after their long break and fought back from a two-goal deficit.

“I always knew it would be a difficult one for us particularly when it’s 36 days since our last A-League fixture, so that was a big concern, and it was actually quite humid conditions tonight,” Milicic said.

“With the majority of our squad having COVID it was difficult circumstances for us, but I’m super pleased that the boys ended up getting a point because I felt because that we were really good tonight, and we deserved something from the game.”