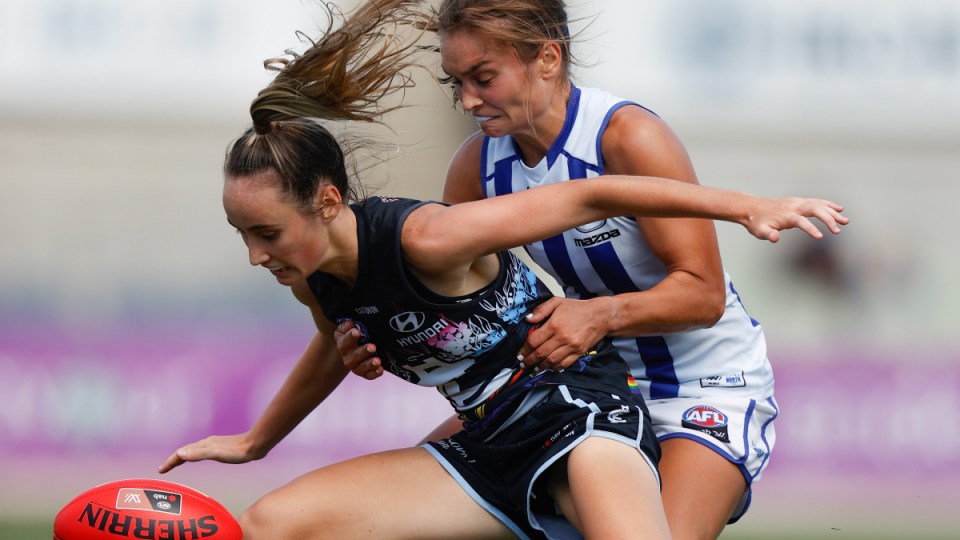 North Melbourne has overcome a persistent Carlton by 30 points to leave the Blues’ AFLW season in serious strife at 1-3.

The Kangaroos dominated Sunday’s contest in front of 2329 fans at Ikon Park but were unable to fully capitalise on the scoreboard.

The Kangaroos jumped to third on the ladder, joining Melbourne and Collingwood with a 3-1 record.

Carlton’s defence held up well against its more-fancied opponent, trailing by just a point at quarter-time despite the Kangaroos leading the inside-50 count 14-2.

Skipper Kerryn Harrington and fellow defender Vaomua Laloifi battled desperately hard but the Blues did not have enough attacking options to be any serious chance of causing an upset.

Carlton forward Darcy Vescio booted their first goal of the season with a tricky snap, Brooke Walker kicked an outstanding major on the run and Georgia Gee slotted a consolation goal with just seconds remaining.

Meanwhile, the Kangaroos had a plethora of goal-kicking threats, including Daria Bannister.

The talented Bannister had just four disposals, but was one of the most influential players on the ground as she booted two tricky set-shots from the pocket to break the game open.

Half-forward Alice O’Loughlin sealed the victory with four minutes remaining, making Carlton pay for a diabolical kicking error deep in the Kangaroos’ half.

Just two minutes after booting her first career goal, O’Loughlin ran onto another one when she soccered the ball through from a few metres out.

The Blues’ campaign does not get any easier next weekend when they face last year’s grand finalist Adelaide, which is coming off an ominous victory over Melbourne.

North will head down to Hobart for a blockbuster home game next Sunday against red-hot premiership contender Fremantle.

Gold Coast has recorded back-to-back AFLW wins for the first time in its short history after upsetting Richmond by five points in a thrilling contest.

The Suns, who hadn’t played for two weeks after their Round 3 match was cancelled because of COVID-19, took the lead late in the last quarter before holding off a frantic final charge from the Tigers.

The 5.9 (39) to 5.4 (34) win at Metricon Stadium puts last year’s wooden spooner just outside the top-six, only behind reigning premier Brisbane on percentage.

Gold Coast endured a winless 2021 season, after an encouraging two-win debut campaign in 2020, but are a far more polished unit this year.

Kangaroos too strong for Carlton in AFLW