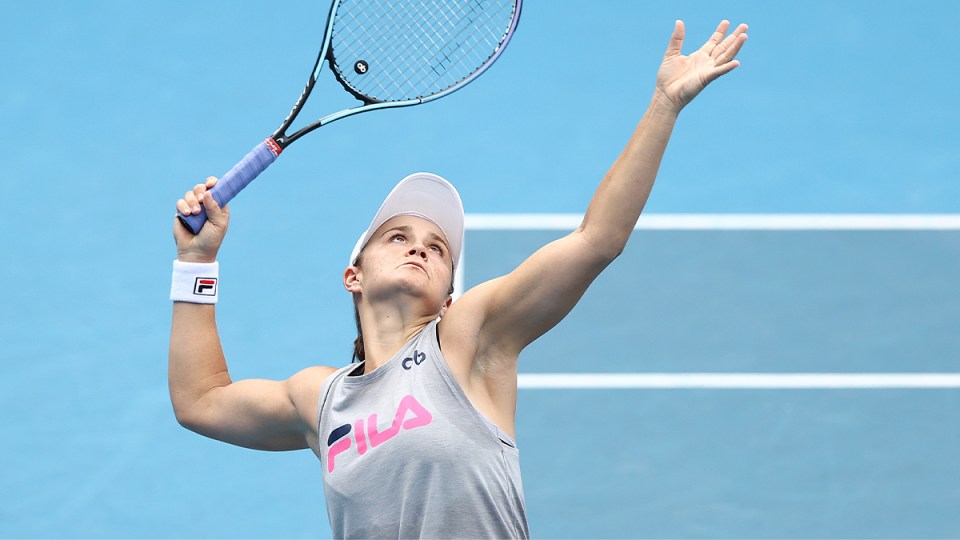 Ash Barty is the first Australian woman to reach the final since 1980.

Danielle Collins was leading Ash Barty in the semi-final of the Adelaide International two years ago when, visibly in pain with a back injury, she summoned the physio.

A courtside patch-up delivered, Collins returned to the battle, refusing to let the setback derail her from trying to topple the new world No. 1.

It was not to be – the physio was called again and Barty, in true champion mindset, upped her game to come home in a tight final set tie-break.

One year later Collins finally beat Barty, in an earlier round of the same tournament. The Queenslander leads their encounters 3-1 but the perils of playing Collins will have been learned.

‘Tough’ is almost certainly the most overused word in tennis lingo but it is wholly appropriate when describing the American.

Like Barty, who famously ducked out of the game to play cricket for a couple of years in her teens, Collins’ route to the top has been unconventional.

Injuries aside, there has been illness – rheumatoid arthritis that left her incapable almost of getting out of bed two years ago – and a playing career that began and flourished within the American college system where she was twice national college (NCAA) champion.

Facing a partisan crowd at Rod Laver Arena on Saturday night will not daunt the world No. 30, who also spent many of her formative years playing all-comers on public courts in Florida.

“I think in college you get used to having an adverse crowd quite often. I always enjoyed it. I love playing with energy, whether it’s for me (or) against me. So I hope that it’s prepared me well, but we’ll find out,” she said.

“This is going to be a little bit bigger stadium than some of the college matches I competed in but I’m just going to try to do the best that I can and embrace every moment.”

Beware, 28-year-old Collins can be a killer on court. Arguably no one hits harder. Long, probing rallies are few and she is way more artisan than artist. She won’t make enemies with the crowd but she won’t engage them either. With Collins, it’s about the result.

When fellow Florida athlete Jim Courier made it big in the early 1990s with a similarly hard-hitting, minimalist style, he was referred to as a ‘blue-collar’ player. To the point, no frills, focus, in your face. They could  have been talking about Collins.

But onto Ash and Australia.

Brizzie’s finest has dropped just 21 games this fortnight. She’s spent almost as much time on the mic at the post-match chat as she has seeing off her six opponents to date.

Will she spend more time training to make up for this inconvenience? No, she says. Ash is in the zone and nothing is about to stop her.

Saturday 7.30pm might not be a Cathy Freeman 2000 moment but, then again, it could well be. Probably will be.

There has been no Australian success at the Australian Open since Chris O’Neil bagged the women’s title in 1978. O’Neill never made it higher than 80 in the world rankings and this was her two weeks in the sun.

With respect, forget O’Neill. Nine of the 10 AO winners before her (since it went pro) were Aussies – Margaret Court four times and Evonne Goolagong-Cawley four also. The Daphne Akhurst trophy has a heavy Australian history.

Barty, with her Indigenous lineage on her dad’s side, has spoken about how she sees Cawley as a special person, someone who has helped and advised her greatly.

With respect this time to Barty, she is yet to enter their league of accomplishment (Court has 24 major singles crowns and Cawley seven with another 11 finals reached). But Barty arrives also at a seminal moment for Australian sport.

The delayed Tokyo Olympics aside, COVID has obliterated much international competition, certainly in Australia. Melbourne is au fait with pandemic lockdowns like almost no other city.

The Australian Open 2022 has been very much about Australians – Dylan Alcott’s Australian of the Year accolade and retirement and the rise and rise of the Special Ks with an all-Aussie foursome to come in Saturday’s men’s doubles final.

It’s been Dylan and Nick and Thanasi’s week but Ash will blow them all out of the water should she beat Collins. And she will.

Her media conference after seeing off a nervy Madison Keys in Thursday’s semi-final was more relaxed and forthcoming than we have seen from her this tournament. Getting to the final is already balm for her soul, it seems.

She talked about the strength of her game and how she uses it to manipulate her opponents.

“I was able to make Maddie uncomfortable and make her press and that was kind of part of the plan. I felt like we did a really good job all in all of playing the match on kind of our terms,” Barty said.

She talked, too, about her serve, which, while not a Kyrgios bomb, is as trusty a weapon as there is in tennis, and about her mindset.

“I know if I do the right things on my part it will make my opponent uncomfortable. I think it’s a little bit of a double-edged sword in a way,” she said.

“Sometimes it’s really nice to be able to focus internally and just focus on what you need to do, and then other times it’s nice to look up the other end of the court and see how your opponent is reacting.”

There were platitudes to her team (Barty invariably says the collective ‘we’ and not ‘I’ when discussing herself) and to Craig Tyzzer, her coach.

“Tyz’, he’s a magician. He’s able to look at a lot of different matches, look at some key matches, and recent, some old, and kind of work our plan out, looking at different conditions and things like that. He’s the man that does all the work.

“Everyone is equally important. We’re all equal. We all play our roles, and I think the most amazing thing is we all communicate really well together and get along with each other and know when it’s time to back off and relax and then when it’s time to switch on and really have a crack.”

It’s all about the team is the message, a touch cheesy but unreservedly true.

Familiarity to the fore

There may well be Barty nerves on Saturday night, but don’t forget also that she is also the reigning Wimbledon champion and, despite a small wobble against Karolina Pliskova in the second set of last year’s final, stood firm in that test.

Ash is 25 years old and knows what she wants and how to achieve it. Sticking to her formula of the most reliable of serves, befuddling slice and booming forehand, should see her through whatever Collins throws at her.

The greater challenge comes with wider expectation. Her profile domestically will surge yet again (a surprise Vogue magazine spread this month has already indicated an expansion in her media profile) and everyone will want to know her.

Unlike many fellow Aussie players, Barty declined to spend 11 months on tour last year and called her season short in September to head home and regroup, familiarity to the fore.

Winning this crown will likely curtail that freedom in the short term but is unlikely to change her very grounded daily outlook. But she may well find, in Australia at least, that she is about to transcend her sport.

Given Serbian visa shenanigans and foolhardy posturing by Tennis Australia and state and federal governments earlier this month, nothing could reposition the Open, Australian sport and indeed Australia, better than an Ash Barty 2022 championship win.

Ash Barty is taking tennis back to where it belongs